Two arrested in Suhum after hot chase by Okada riders 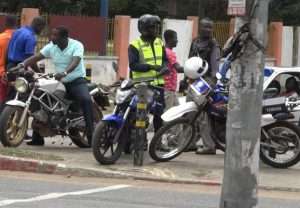 Two male suspects have been arrested by the Suhum Police Command for impersonation, extortion and robbery, among other offences.

The suspects are Solomon Aquah, 25, and Prince Obeng, 20.

Police report reveals that on Wednesday, May 27 the police patrol team on its usual rounds chanced on a chase for the suspects by Okada (motor cycle) riders.

One of the Okada riders, Sampson Adjei, told the police that suspect Solomon Aquah, who was dressed in army uniform, blocked a section of the Obourho road with a taxi cab assisted by Prince Obeng.

The two had stopped him for using an unregistered motor bike.

They stopped othere Okada riders as well with money and food stuff extorted from them.

But after some time, the Okada riders got suspicious of the modus operandi of suspect Solomon Aquah and they massed up and challenged his authority.

Upon sensing danger, Solomon Aquah and Prince Obeng sped off in the taxi cab.

The riders pursued them from Obourho to the Suhum roundabout, where the patrol team chanced on the incident and arrested the two suspects.

The two suspects and the taxi cab with registration number GW 7544-19 was impounded and sent to the Suhum Police Station.

After the arrest, a taxi driver by name Michael Martey was at the Suhum Police Station to identify the taxi cab as his.

He narrated how Solomon Aquah and three others snatched the taxi cab from him at Budu days ago.

The two Suspects are in police custody assisting in investigations.