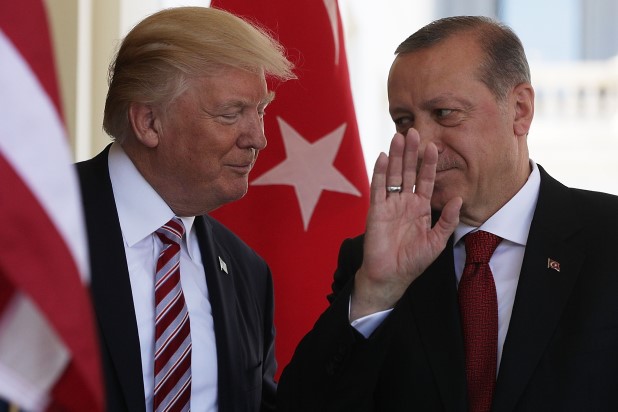 Turkish President Recep Tayyip Erdogan put US President Donald Trump’s letter “in the bin”, the BBC has been told.

In the letter dated 9 October, and sent after US troops were pulled out of Syria, Mr Trump told Mr Erdogan: “Don’t be a tough guy. Don’t be a fool!”

President Trump was urging Turkey not to launch a military offensive against Kurdish-led forces in northern Syria, but Mr Erdogan ignored this request.

Trump tells supporters to get vaccinated

US Vice President Mike Pence is now in Ankara to push for a ceasefire.

The US has faced intense criticism for the withdrawal of troops, which critics say gave Turkey the green light to launch the military attack.

In recent years, the Kurdish-led Syrian Democratic Forces (SDF) alliance has been a critical ally to the US in the fight against the Islamic State (IS) group in Syria.

There are fears that the destabilisation of northern Syria could lead to a jihadist resurgence.

The SDF is dominated by the members of a Kurdish militia called the People’s Protection Units (YPG).

Turkey says the YPG is an extension of the Kurdistan Workers’ Party (PKK), a rebel group fighting for Kurdish autonomy in the region.

What did Trump’s letter say? 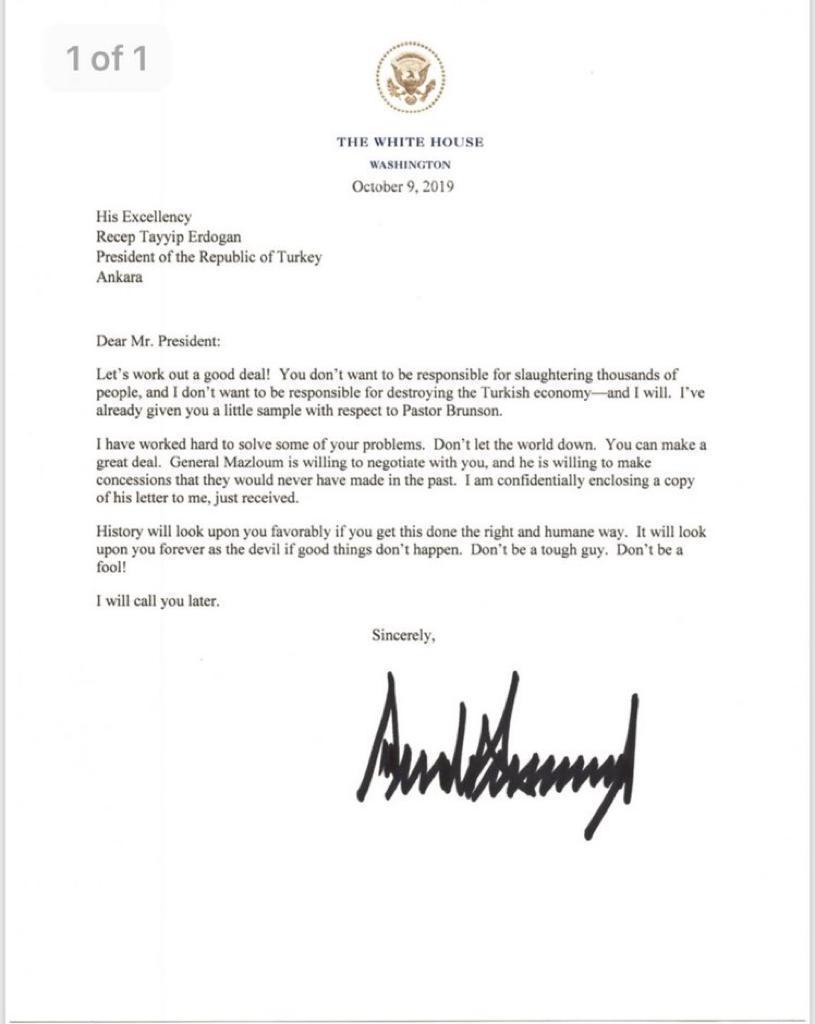 In response, Turkish presidential sources told BBC Turkish: “President Erdogan received the letter, thoroughly rejected it and put it in the bin.”

How have others responded to the crisis?

Much of the criticism levelled at Mr Trump has come from within his own party.

In a rare bipartisan rebuke, 129 members of the president’s Republican Party in the House of Representatives joined Democrats to formally denounce the move in a vote on Wednesday.

The joint resolution, which also called on President Erdogan to immediately cease military operations against Kurdish-led forces, was voted in by 354-60.

House Speaker Nancy Pelosi also held an apparently explosive meeting with President Trump on the issue, which led to her and Senate Minority Leader Charles Schumer walking out of the room.

Republican leaders said Ms Pelosi’s behaviour was “unbecoming”, and criticised her for “storming out”.

Ms Pelosi and Mr Trump also each accused the other of having a “meltdown”, with the president later tweeting a photo of their confrontation.

But the image has been praised by Democrats, who said it was “iconic” and showed Ms Pelosi’s “finest moment”. Ms Pelosi also made the photo her top image on Twitter.

What has Trump said?

Earlier on Wednesday, President Trump said the US should not be intervening in Turkey’s military operation in Syria because it is “not our border”, and called the former US allies the Kurds “no angels”.

“They have a problem at a border,” he told reporters at the White House. “It’s not our border. We shouldn’t be losing lives over it.”

The president also said he thought the situation on the Turkey-Syria border was “strategically brilliant” for the US.

“We’re watching and we’re negotiating and we’re trying to get Turkey to do the right thing, because we’d like to stop wars regardless.”

What is the context?

The aim, Turkey said, was to push YPG fighters back from the border, and to create a “safe zone” where up to two million Syrian refugees could be resettled.

The Syrian Observatory for Human Rights (SOHR), a UK-based monitoring group, said on Wednesday that 71 civilians had been killed in Syria since the beginning of the operation.

However, the health authority of the Kurdish-led administration in the region put the civilian death toll at 218 on Thursday.

At least 185 SDF fighters, 164 pro-Turkish rebels and nine Turkish soldiers have also been killed in the fighting, according to the SOHR.

Watch out! We are back – Akatakyie

Trump tells supporters to get vaccinated

Senators in final bid to derail certification of Biden’s victory

Watch out! We are back - Akatakyie

Scale up your supervisory role – SC Justice to Parliament

23-yr-old nabbed for attempting to sacrifice nephew for rituals

Scale up your supervisory role – SC Justice to Parliament

23-yr-old nabbed for attempting to sacrifice nephew for rituals