Demonstrations have broken out across the country in recent days Photo: AFP/GETTY[/caption]

The Tunisian government has announced a wave of social reforms, following days of demonstrations by anti-austerity protesters.

Protests broke out ahead of Sunday’s seventh anniversary of the ousting of President Zine al-Abidine Ben Ali. Emergency government meetings were held in response to protests, which have seen more than 800 people arrested. Officials said plans had been submitted to parliament to reform medical care, housing and increase aid to the poor. Demonstrations began earlier this month after the government announced New Year tax and price increases in its 2018 budget. In December the International Monetary Fund (IMF) told Tunisia it needed to take “urgent action” to reduce its budget deficit. Successive governments have failed to resolve national unemployment and poverty, and the country’s vital tourism industry has struggled to rebuild after terror attacks targeted foreign nationals in 2015, killing dozens. People have taken to the streets against the budget measures, despite Prime Minister Yousef Chahed attempting to assure Tunisians that 2018 would be the country’s last “difficult” year. Interior ministry spokesman Khlifa Chibani said on Saturday that 803 people had been arrested throughout the week on suspicion of violence, theft and looting during demonstrations. [caption id="" align="alignnone" width="720"] 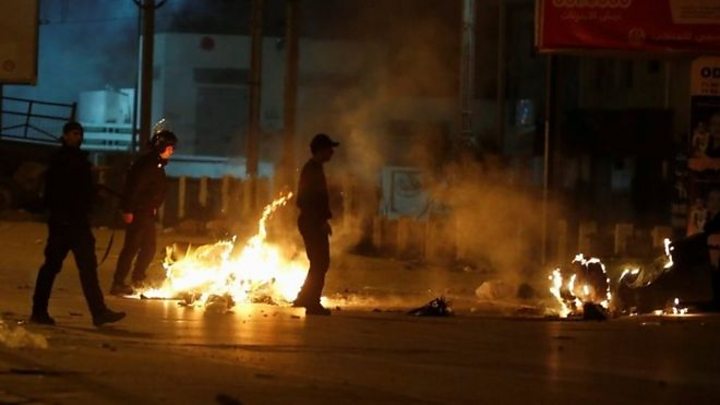 Some anti-austerity protests have turned violent in recent days[/caption] He said 97 members of the country’s security forces had been injured in the unrest, but did not say how many protestors had been hurt. The United Nations human rights office expressed concern on Friday over the large numbers being detained. But Tunisia’s President Beji Caid Essebsi accused the foreign press of “amplifying” the unrest and damaging the country’s image with its coverage. He hosted two hours of crisis talks with political parties, powerful trade unions and employers on Saturday to try and decide on reforms to alleviate national tension. Mohammed Trabelsi, the Minister of Social Affairs, said the government proposed increasing welfare payments to those in need by 170 million dinars ($70m; £50m). “This will affect about 250,000 families,” he said. “It will help the poor and middle class.” He also alluded to plans for guaranteed medical care and housing reform, but did not give further details.
READ ALSO:  Asante Akim North defies injunction to hold primary
Source: BBC]]>

Uruguay beat Ghana but both nations are knocked out of World...