Once again, Donald Trump is betting he knows best about how to win an election, in a new swipe at conventional political wisdom that will make for an especially tense and unpredictable night once midterm results start rolling in.

The President charged into Election Day Tuesday flinging vitriol and fear, false claims and politically incorrect rhetoric, defying warnings by GOP aides that his divisive style could cost Republicans the House of Representatives and that he should be focusing exclusively on the hot economy.
Two years into Trump’s tempestuous presidency, Democrats are targeting their best election results in six years. But given uncertainty over the quality of polling, questions over the makeup of the electorate and Trump’s talent for busting political norms, no one can say for sure how the election will play out.
Handicapping the races for all 435 House seats and one-third of the Senate is especially difficult because Trump has chosen an inflammatory campaign strategy that even some top GOP officials fear could backfire. 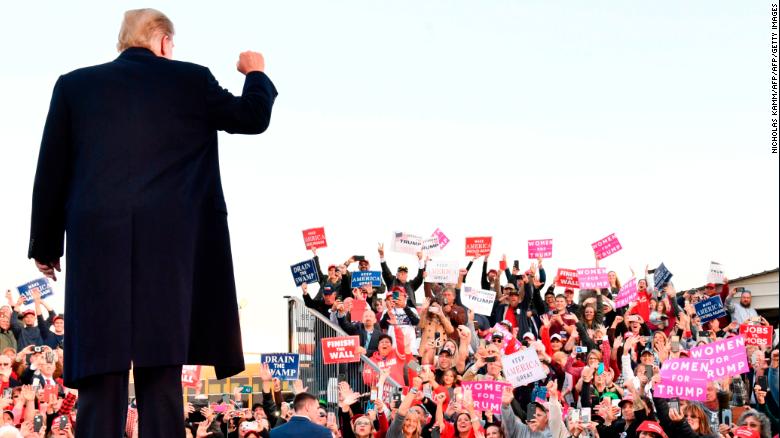 After ditching a message about the roaring economy in favor of a searing race-fueled attack on Democrats over immigration, Trump is trusting his own feel for what voters want to hear is still more acute than the advice of Republican strategists.
If Tuesday is a bad night for Republicans, his high-stakes bet is sure to be second-guessed, but Trump is choosing to believe he’s got it right again. After all, trusting his instincts and ignoring GOP elites and pundits is what landed him in the White House in the first place.
“There’s a great electricity in the air, like we haven’t seen, in my opinion, since the ’16 election. So, something is happening,” Trump told reporters on Monday, shrugging off suggestions that Democrats had the momentum.
On the final day of an eight-state, 11-rally, six-day final campaign blitz, Trump rejected polling and historical precedent that suggests his low approval rating — at 39% in the latest CNN poll — could mean heavy losses for the GOP. At his final campaign stop at an exuberant rally in Missouri, Trump complained about media critiques of his tactics.
“If we don’t do so well tomorrow, they will put me on the ticket. If we do great tomorrow, they will say he had nothing to do with it, he was not on the ticket,” Trump said.
Capping the most incendiary campaign by any President in modern memory, Trump has been conjuring a dark vision of crime and disorder that he said would unfold if Democrats won the House. On Monday, he warned of “Democratic mobs” and spoke of looming “socialist nightmare.”
He appeared alongside Rush Limbaugh, the king of conservative talk radio at his final rally in Missouri before returning to the White House shortly after 2 a.m. Tuesday. He also falsely accused Democrats of trying to get the vote for undocumented immigrants.
None of that was an accident.
Sources told CNN that the President “hated” a feel-good advertisement hailing the booming economy made by his re-election campaign and insisted instead on a hardline immigration message that including a racist web video in the belief that the issue puts Democrats on the defensive.
“They want America to be a giant sanctuary city for drug dealers, predators and blood thirsty MS-13 killers,” Trump said at his first rally of the day in Ohio, invoking the migrant caravan of asylum seekers that he has portrayed as an imminent invasion even though it remains hundreds of miles away in Mexico.

Most serious test yet 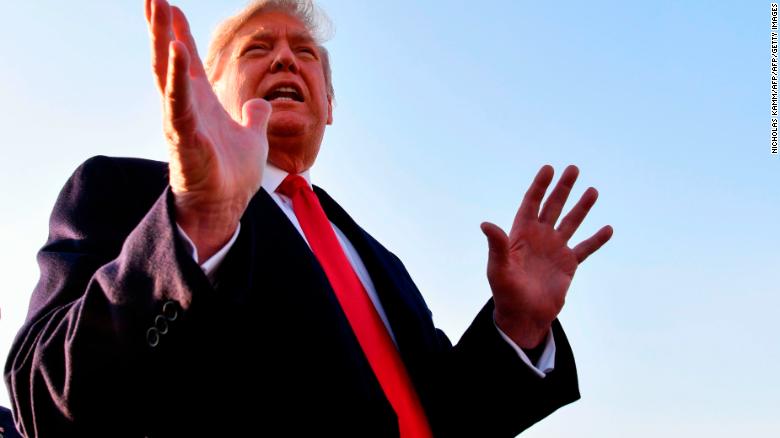 US President Donald Trump speaks with reporters
Tuesday’s election, billed by both sides as the most important midterm in years, will be the most serious test yet of the way that Trump has conducted his tumultuous presidency and his refusal to tone down his behavior to widen his support base beyond the core of loyal voters who embraced his populist nationalism in 2016.
The President’s brazen style could help the Republicans hang on to the Senate, since many incumbent Democrats are up for re-election in red states where he won big. But GOP strategists are worried that the President’s pyrotechnics that are designed to drive up enthusiasm and turnout among his most loyal fans will backfire in the suburban districts that hold the fate of the House.
White House officials have warned Trump to expect losses in the House, multiple sources told CNN’s Kaitlan Collins. And the President’s decision to anchor the campaign on inflammatory rhetoric about immigration rather than one highlighting the roaring economy has angered some GOP strategists.
“I think many of us would rather win without dehumanizing and fear-mongering,” a senior Republican Senate aide told CNN’s Jim Acosta.
Another GOP congressional aide warned that Trump’s immigration message could fall flat in areas like suburban Virginia, Pennsylvania, Florida and California.
But there was one small sign that the President understands that his conduct could hurt him among some voters.
“I would like to have a much softer tone. I feel to a certain extent I have no choice, but maybe I do,” Trump said in an interview with Sinclair Broadcast Group when asked if he had any regrets about his presidency. 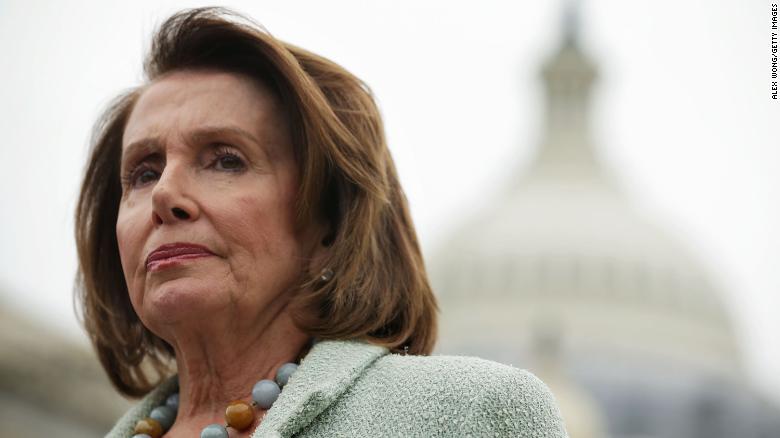 Democrats, who have largely avoided engaging Trump directly, preferring to concentrate on issues like health care are increasingly confident that they will take back the House and so bust the Republican monopoly in power in Washington.
A CNN/SSRS poll released Monday showed Democrats with a gaping 55% to 42% lead over Republicans among likely voters in a generic congressional ballot. Trump was badly underwater among women voters — who favor Democrats 62% to 35% — a gender gap, that if borne out by real votes, could prove devastating to Republican hopes.
In the latest forecast by CNN’s Harry Enten, Democrats are tipped to win 226 seats and the House majority while Republicans will win just 209 seats. Republicans are expected to hold 52 Senate seats and to retain their majority.
But all forecasts and predictions are clouded by doubt given the unique characteristics of this election and the lessons learned after Trump’s shock victory over Hillary Clinton two years ago.
Trump is such an idiosyncratic politician, and has shattered norms so often, that no one is yet ready to conclude he will fall prey to the traditional losses handed out to a new president in their first midterm election. 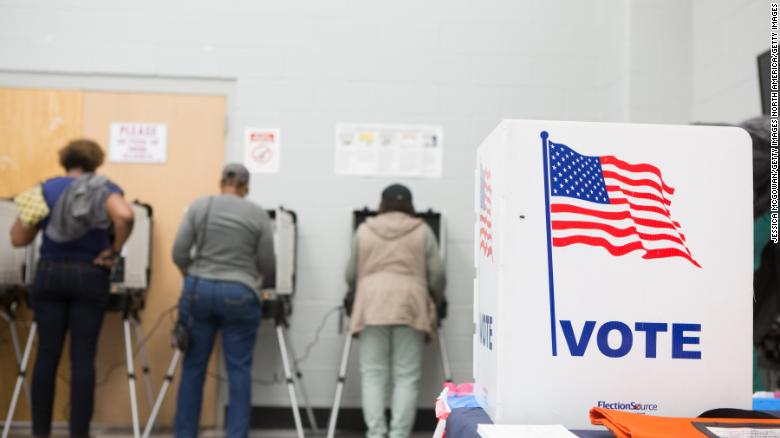 Voters cast ballots
Then there is the question of whether voters are hiding their true inclinations from pollsters, as seemed to be part of the case in 2016 when Trump outperformed polls.
“I’m a religious man but I am not a prophet,” Rep. Chris Stewart, R-Utah, told CNN’s Wolf Blitzer on “The Situation Room” on Monday when asked what would happen on Tuesday. “I don’t think anyone knows, so many of these races are within the margin of error.”
Democrats, even while expecting their best night since President Barack Obama was re-elected six years ago, are not counting any chickens, given their raw memories of 2016.
“I was here, near tears in 2016, and so, no, we don’t trust polls at all,” said Bakari Sellers, a CNN commentator and former Democratic state lawmaker in South Carolina on “The Lead with Jake Tapper.”
A Democratic House for the first time in eight years would be disastrous for Trump as it would guarantee a flood of investigations and subpoenas heading to the White House from committee chairman targeting his administration and personal business affairs.
In essence, the midterm election will decide whether voters, after a tumultuous two years want to rein in Trump’s power, or effectively want to give him more control by preserving the GOP monopoly on power in Washington.
CNN
]]>
READ ALSO:  'Manhood' court case taking a toll on my music career − Wisa Gried

[3News Live] Our economy is on the upswing – Ofori-Atta claims