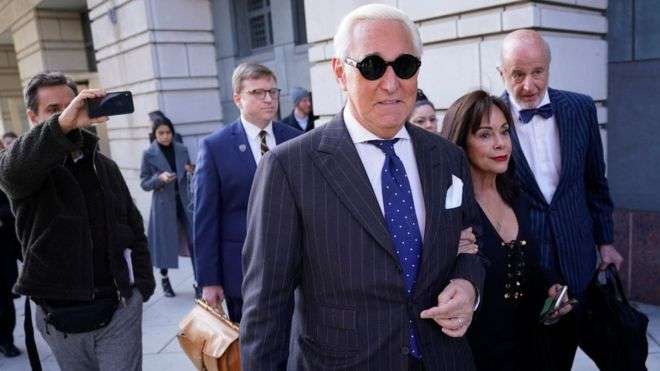 Roger Stone, long-time adviser and ally to President Donald Trump, has been sentenced to 40 months in jail.

Stone, 67, was found guilty in November on seven counts of lying to Congress, obstruction and witness tampering.

He is the sixth Trump aide convicted in a criminal case resulting from Robert Mueller’s investigation into alleged collusion between Russia and the Trump campaign during the 2016 election.

Mr Trump has hinted he may pardon his ally.

Stone has maintained the case against him was politically motivated.

Explaining the sentence, Judge Amy Berman Jackson said Stone had engaged in “intolerable” “threatening and intimidating conduct” toward her.

Last week, prosecutors on the case quit after the Justice Department said it planned to reduce the amount of prison time sought for the president’s long-time ally.

The prosecutors had recommended a sentence of seven to nine years.

In a tweet, Mr Trump had called the recommendation “very horrible and unfair”.

The court heard that Stone had told five lies under oath, including about his conversations with Trump campaign officials and a supposed “intermediary” with WikiLeaks in early August 2016.

He also lied about the existence of certain texts or emails.

Speaking in a Washington courtroom on Thursday, Judge Jackson said Stone “knew exactly what he was doing” when he posted an image to social media last year of a gun sight over the judge, calling the proceedings a “show trial”.

“This is intolerable to the rule of justice,” Judge Jackson said. “The court cannot just sit idly by and say ‘that’s just Roger being Roger.'”

Stone told the court that he thought the crosshairs in the picture he posted of Judge Jackson on Monday actually depicted a Celtic cross.

“I am kicking myself over my own stupidity but not more than my wife is kicking me,” he said.

Stone, wearing sunglasses and a dark fedora, declined to speak at Thursday’s hearing.

His lawyer, Seth Ginsberg, said Stone’s public persona – that of a self-described “dirty trickster” – masked the true “human being”, a spiritual man, devoted to his family.

Mr Ginsberg had argued that Stone did not deserve the tougher sentencing guidelines demanded by federal guidelines.

She continued: “The dismay and disgust at the defendant’s belligerence should transcend party.”

“At his core, Mr. Stone is an insecure person who craves and recklessly pursues attention.”

Entering the courthouse flanked by his wife, family and friends, Stone walked past several protesters, including one giant inflatable rat dressed as Mr Trump, another demonstrator shouting “traitor”.

Awaiting Stone’s sentencing, Mr Trump sent a tweet that seemed to question his ally’s conviction and name-checking a host of perceived enemies.

“They say Roger Stone lied to Congress.” @CNN OH, I see, but so did Comey (and he also leaked classified information, for which almost everyone, other than Crooked Hillary Clinton, goes to jail for a long time), and so did Andy McCabe, who also lied to the FBI! FAIRNESS?

The sentence delivered by Judge Jackson falls short of the seven- to nine-year recommendation from prosecutors.

This initial sentencing suggestion was quickly overruled by the US Department of Justice after Mr Trump’s public complaints. This reversal led all four prosecutors to quit the case, one leaving the justice department entirely.

At trial on Thursday, Judge Jackson called the Justice Department intervention “unprecedented”. But she said the politics surrounding the case did not inform her ultimate decision.

Stone, a political veteran, has worked with Republicans since the 1970s and has a tattoo of Richard Nixon on his back.

In the 1990s, Stone worked as a lobbyist for Mr Trump’s casino business, and later helped Mr Trump’s unsuccessful White House run in 2000.

According to the Netflix documentary Get Me Roger Stone, the strategist reportedly encouraged Mr Trump to run for the presidency.

Stone declined questions as he left the courthouse on Thursday, making his way through a crowd of people to a waiting vehicle, with a small smile on his face.

US President Donald Trump has commuted the prison sentence of his longtime ally and former adviser Roger Stone. The move...