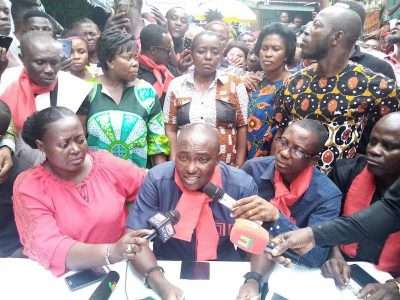 Three traders’ associations in Kumasi are demanding the immediate occupation of the completed new Kejetia market.

The groups have questioned delays by the Kumasi Metropolitan Assembly (KMA) in opening up the market for trading activities.

The aggrieved traders from the three associations closed their shops temporarily, Monday morning, to protest the delay in going to the new market.

The KMA started allocation of shops to the traders about three months ago with the assurance the market would be opened for business.

Over 5,000 traders have so far been allocated spaces in the new market, but the market which was officially commissioned by the Asantehene, remains shut.

At a news conference, the traders demanded the immediate opening of the market to business.

“We’ve been forced to make this statement because of cheating, lack of transparency and attempts to continue to deprive us of our livelihood,” he said.

According to him, the traders have for four long years been deprived of their livelhoddo as they waited for the project to be completed and “now we are being deceived day and night”

He claimed their provisional place of occupation is current “in jeopardy” and are even being instructed to vacate the place.

Some traders are being moved from the Central Market “without respite”, he said.

Mr Kwofie said authorities keep telling them that traders whose shops were demolished will be compensated, but that has not materialised as they keep giving them empty promises.

Also, he said their proposal to make 20 per cent down payment for the shops and the rest spread for a period, has been rejected, though they were “initially made to understand that it will be accepted”.

“The continuous delay in opening the market is not only distasteful but a gross and flagrant disregard of the wish of Otumfuo Osei Tutu,” Mr Kwofie said.

On the back of these, he said the traders are demanding “immediate occupation of the shops” at the new kejetia market as they have from September 30 vacated the temporarily place of occupation.

They are also insisting they will pay only 20 per cent of the cost of the new shops and the remainder spread over a period without interest.

They have also called on the Members of Parliament in the region to intervene in protecting the livelihoods of local traders.

Meanwhile, the Kumasi Metropolitan Assembly has indicated its readiness to open the market.

Metro Chief Executive, Osei Asibey Antwi, said security and other service providers are being engaged for the smooth take off of trading at the market.