Ten 20-footer containers being escorted by the national security from one terminal to another within the Tema port enclave have gone missing.

The confiscated containers full of canned tomatoes were being moved from the Tema Container Terminal (TCT) to Atlas in a distance of about 9.9 kilometers.

The containers classified as overstayed cargos were being transferred to Atlas for “examination and necessary action”.

GRA saga: Apologize for deceitful comment against me – Prof Adei to Mahama

It was later discovered that the ten containers did not get to Atlas, their intended destination.

Meanwhile, the Tema command of Customs Division of the Ghana Revenue Authority is investigating the circumstances under which the 20-footer containers went missing from the port during a transfer process to another terminal.

The two custom officers are being questioned by the Tema Marine Police about the incident, 3news.com’s Josephine Frimpong reports.

Further checks by Josephine revealed that the containers may have found their way to Kumasi in the Ashanti region.

Officials from the Ghana Revenue Authority, 3news.com gathered, are said to be moving to Kumasi to identify the goods and possibly retrieve them.

Assistant Commissioner at the Customs Division of GRA in charge of Tema Command, Dr Godfred Oko Appiah calls the incident “unfortunate”, insisting that punitive measures would be applied to the letter. 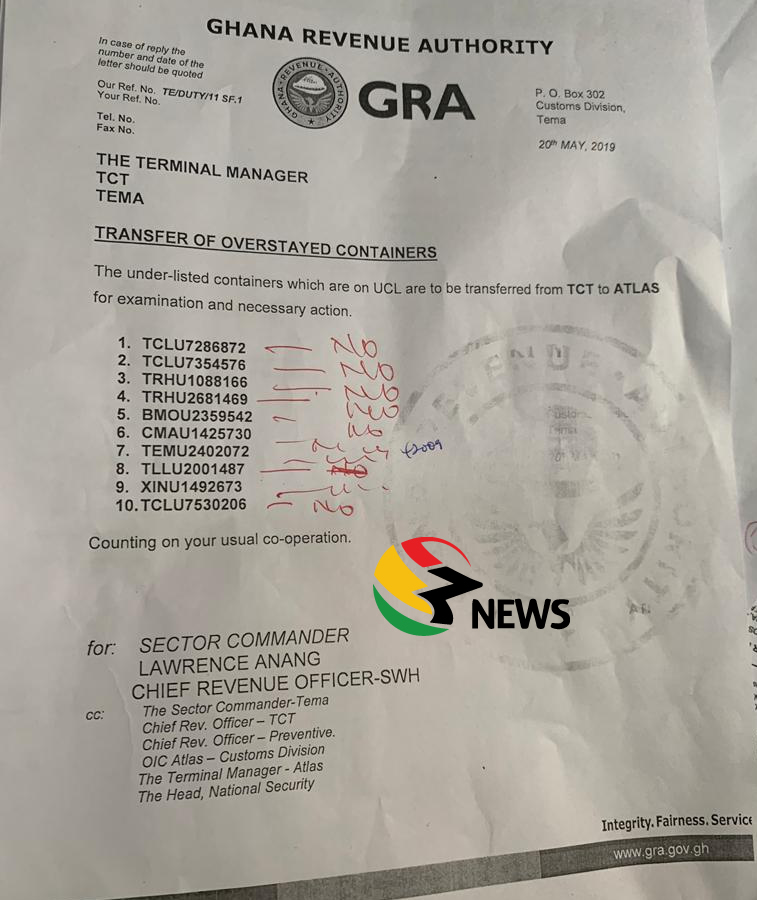 Akufo-Addo gets backing from female appointees

GRA saga: Apologize for deceitful comment against me – Prof Adei to Mahama

Tax evasion is a crime, desist from it – PEF Boss to companies

Most importers under-declare, they must be truthful – Customs C’ssioner

Akufo-Addo gets backing from female appointees

Video: Judgement debt conundrum and its implications on the economy

Video: Judgement debt conundrum and its implications on the economy