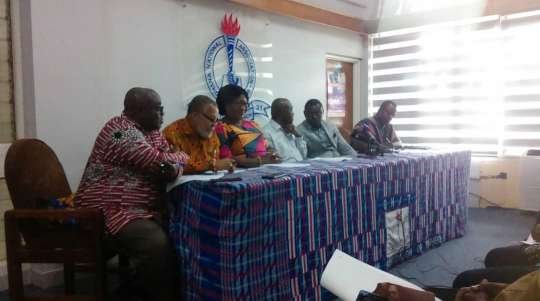 The leadership of teacher unions have called on the Public Services Commission to suspend the implementation of the Human Resource Management Information System (HRMIS) software for GES employees. General Secretary of the Ghana National Association of Teachers (GNAT), David Ofori Acheampong, said if by Friday, September 20, the suspension was not done, they would organise and picket at the premises of the Commission to drive their demand. Mr. Acheampong was addressing a joint press conference organised by GNAT, Coalition of Concerned Teachers Ghana and the Teachers and Education Workers Union in Accra. He urged the Management of the Commission to as a matter of urgency to drop the software used to processed information and data of public sector workers in the country. He said, “The system as designed in its present form is not compatible with the scheme of service in the GES and, therefore, we have challenges working with it.” The HRMIS is to provide an accurate data on employees that Government has engaged so that at any material time if there are vacancies in any establishment in any establishment it could be verified for the replacement to be done. He said the designers of the software did not take the peculiarities of the GES into consideration in the design before GES was migrated into the system. The General Secretary said the teacher Unions has raised concerns of the software earlier in July this year, and the Government had directed the Commission to suspend the project to enable GES to input promotions and upgrading, as well as update employees’ records with respect to transfers and change of management unit numbers on the payroll. He said, however, the request has not been carried through resulting in the undue delay in the processing and payment of all types of arrears. In a related development, Mrs. Philippa Larson, National President, GNAT, denounced concerns raised by some Regional Chairman of the Association to embark on industrial action. Mrs. Larson said the concerns raised by some of the Regional Chairman purported to be from their members were already being discussed by the Association and other key and relevant stakeholders. She said concerns raised in the press release by the Regional Chairman such as GES/SIC Group Life Insurance policy deductions, non-payment of salary arrears, delay in salary adjustment, interview and issuance of promotional letters, among others, were issues the Association were already in talks with the GES and the Ministry of Education to find lasting solutions.