The number of people killed in a crackdown on pro-democracy protests in the Sudanese capital Khartoum has risen to 60, an opposition group says.

Members of a feared paramilitary group are reported to be roaming the streets attacking civilians.

The violence began when forces of the Transitional Military Council (TMC) opened fire on unarmed protesters on Monday.

The military has faced international condemnation for the attack.

An attempt at the UN Security Council to condemn the violence was blocked on Tuesday by China, backed by Russia.

What is happening in Sudan?

Demonstrators had been occupying the square in front of the military headquarters since 6 April, days before President Omar al-Bashir was overthrown after 30 years in power.

Their representatives had been negotiating with the TMC and had agreed a three-year transition that would culminate in elections.

But on Monday, forces swept in to remove protesters from the square.

Many Khartoum residents blamed the Rapid Support Forces for the crackdown. The paramilitary unit – formerly known as the Janjaweed militia – gained notoriety in the Darfur conflict in western Sudan in 2003. 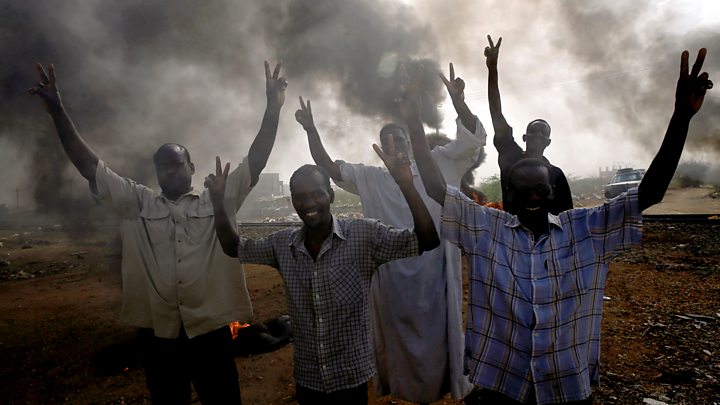 On Tuesday the TMC announced elections would be held within nine months. Demonstrators had argued that a longer period was needed to guarantee fair elections and dismantle the political network associated with the former government.

Sudan’s military has faced international condemnation for its attack, but there were clear signs this was likely to happen. The country has been driven backwards by a military elite intent on holding on to power.

The TMC has scrapped agreements reached with the opposition Forces of Freedom and Change (FFC), saying this will speed up the transition to democratic elections. That plan is likely a fiction.

The military also enjoys another advantage. In an age of international division, the notion of an “international community” pressuring the regime is fantasy. Sudan’s crisis has exposed the reality of international politics – that force can have its way, without consequence, if the killers and torturers represent a valuable asset to other powers.

It is impossible to say whether the FFC can come back as a street-driven force. What will not change – in fact what has been deepened – is the alienation of people from their rulers.

The protesters had called for the Islamic festival of Eid al-Fitr, marked on Tuesday and Wednesday this week, to be celebrated in the streets, as a gesture of defiance against the military.

However, much of Khartoum is under lockdown. Witnesses said protesters had retreated to residential areas where they were building barricades and burning tyres.

Video shot on mobile phones showed columns of troops advancing through the streets.

The Central Committee of Sudanese Doctors earlier gave a death toll of 40, but revised the figure to 60 on its Facebook page on Wednesday.

Protest organisers, the Sudanese Professionals Association (SPA), accused the TMC of carrying out “a massacre” and urged its supporters to continue protesting peacefully.

One Khartoum resident, who declined to be named, told the BBC that residents were living in fear as reports of atrocities spread.

Her uncle had witnessed three young men being executed in the city, she said.

Another resident, who also asked not to be named, told the BBC he was pulled from his car by members of the Janjaweed and beaten on his head and back.

Large numbers of heavily armed troops were also reported on the streets of Omdurman, Sudan’s second-largest city, just across the River Nile from Khartoum.

A woman, identified only as Sulaima, told the BBC that troops from the Rapid Support Forces were “all over Khartoum”.

Earlier, Gen Abdel Fattah al-Burhan, the TMC head, said on state television that the council had decided to “stop negotiating” with the protesters. He said all previous agreements had been cancelled and that an election would be held in nine months.

What happened at the UN?

The UK and Germany had circulated a draft statement at the UN Security Council condemning the deaths of civilians and urging Sudan’s military and protesters to “continue working together” towards a solution.

China rejected the text and Russia said the council should first wait for a response from the African Union.

After the move was blocked, eight European countries issued their own joint statement condemning the attacks “by Sudanese security services against civilians” and calling for a transfer of power to a civilian-led government.

What happened on Monday?

Security services moved on the main protest site early on Monday and, according to activists, forces also surrounded a hospital in Khartoum and opened fire at another.

In a televised statement, the military council said the operation had targeted “trouble makers and petty criminals” and that they were dedicated to protecting civilians.

The SPA responded by calling for a campaign of “sweeping civil disobedience to topple the treacherous and killer military council”.

Speaking on BBC’s Newsday, the analyst and former British ambassador to Sudan, Rosalind Marsden, said the snap election would “simply pave the way for much of the old regime to come back into power”.

“There’s a real risk of violence continuing,” she said.