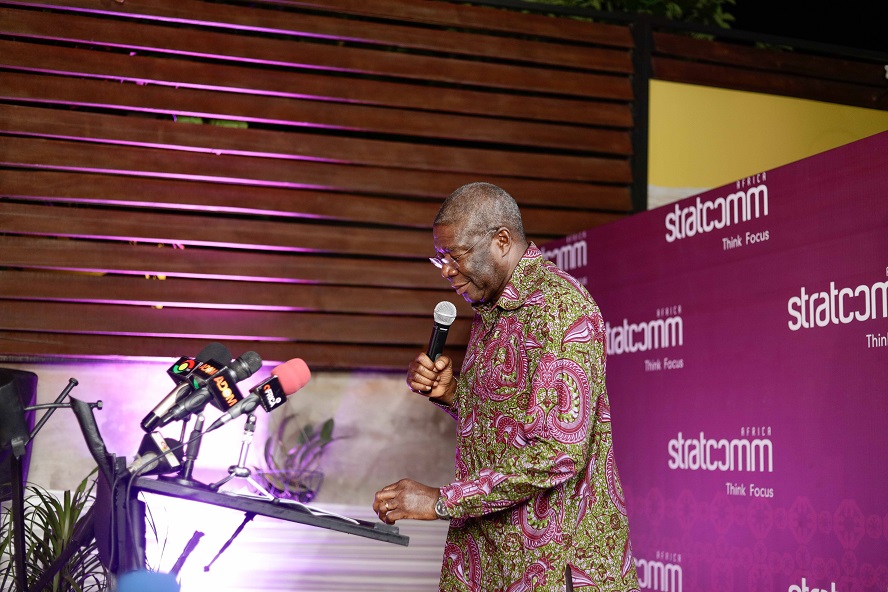 Strategic Communications Africa (Stratcomm Africa), a communications and reputation management agency in Ghana, last Friday marked its 25th anniversary celebration in Accra with an event that attracted players from the corporate world and clients of the agency.

For its 25 years, the agency has successfully provided professional communication support to hundreds of individuals, organizations, public and private firms in and beyond Ghana.

Founded by Ms. Esther A. N. Cobbah, the company began operations in May 1994 as a social enterprise with the aim of demonstrating the value of communications to individual livelihood enhancement, business growth and national development, and to create jobs for the youth.

Deputy Chairperson of the African Union Commission, Kwesi Quartey who was the keynote speaker commended the Chief Executive of Stratcomm Africa,  Cobbah, on her vision in establishing the company.

He highlighted the importance of communication for the attainment of the vision of the African Union of an integrated, prosperous and peaceful Africa, driven by its own citizens.

This vision, he noted, needs to be communicated to the youth of Africa so they do not risk their lives seeking to cross the Sahara desert and the Mediterranean Sea to reach Europe instead of staying in Africa and contributing their capabilities towards realizing that vision.

He called on the media to be part of ensuring peace and prosperity in the country and on the continent rather than stoking division.

Mr Quartey referred to the important role Ghana has played in the quest for African unity and indicated that the statue of Ghana’s first President, Osagyefo Dr. Kwame Nkrumah, at the headquarters of the African Union is a recognition of this fact.

He further stated that the African Continental Free Trade Area, which is due to be launched at an Extraordinary Summit of the African Union to be held in Niamey, Niger, next week is a major step towards the integration of the economies of African countries.

He said it will create enormous opportunities for the economic growth of African countries.

Chairman of the Board of Directors of Stratcomm Africa, Rev Professor Samuel K Adjepong, who is a former Vice-Chancellor of the University of Cape Coast, and the Methodist University, traced the history of the company from a study table to a container office and, now, its office in the central business district of Accra.

He lauded the Chief Executive, Ms Cobbah, for her leadership of the company and also commended staff of the company, past and present, for their contributions.

Emphasizing the importance that Stratcomm Africa attaches to building the capacity of its staff, he stated that the Board would be working with the management on further capacity-building initiatives for staff as the company looks ahead to the next 25 years and beyond.

Ms Cobbah praised God for bringing the company this far.

She said: “Isaiah 26:12b sums up what is in our hearts: ‘…all we have accomplished is really from you’. Verse 13b, therefore, continues: ‘..you alone are the one we worship.’”

She stated the 25 year journey of the company has not been an easy one “but there is every reason to celebrate the fact that the little seed that was sown has taken firm root and the tree is standing strong. It is not by our human might that this has happened”.

Touching on the anniversary theme “Communications Excellence for Africa’s Prosperity in this Digital Age” she said excellence in communication is critical for attaining Africa’s prosperity.

“We know that for nations to prosper, good governance is key. This involves drawing information from the citizenry, making their views part of decision making while governments also stay accountable to the citizenry. This requires effective two -way communication and not just policy pronouncements, directives and information dissemination.”

Ms. Cobbah highlighted the importance of training for effective communication

“The call to communication excellence is the battle cry for our 25th anniversary celebration. We want to show that Communication Excellence will help us on this continent to advance our aspirations and help us to achieve the prosperity we desire. This call to excellence means that anyone who claims to be a communicator or wants to be seen as an expert in communication must ensure that they are well trained to deliver excellently.”

In his word of exhortation, Rev. Enoch Thompson, Vice-President of the Ghana Baptist Convention, acknowledged the significance of Stratcomm Africa, stating it was God that had enabled the company to achieve success.

He urged businesses to recognize that it is by the power of God that they attain prosperity and as they acknowledge this, they could count on God’s continued blessing.