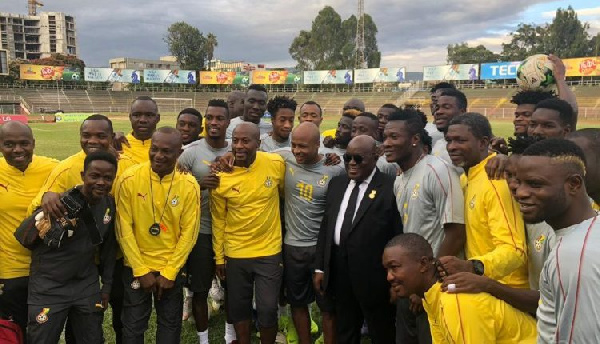 In defense of the players, what really is the contribution of the state in their development as footballers to then expect any form of sacrifice from them? The average footballer in Ghana makes it thanks to the grace of God, sheer will and hard work. No contribution at all from government. Infrastructure and facilities in sports are non-existent. Right from basic school to University, there are no proper investment and attention given athletes in the Ghanaian curriculum. Sadly, when external organizations offer this help, monies are squandered if not used for other purposes. Not long ago, FIFA sponsored a $500k ultra-modern sports complex as part of its GoalProject. What the GFA constructed with that money is insulting to say the least. So just as chartered accountants remember all their toil, look at their skillset, experience and that enviable certificate in negotiating during an interview for a public office, the footballer and by extension athlete remembers the cuts they suffer while training on that grassless surface. The many times they could not walk because they had twisted an ankle or in more horrific cases, fractured or broken a bone. All those years of hard work too. They remember it all. So why should they offer their service for less when no one else in the country would? Yet we need to admit this simple truth; the AFCON is not an escort, stop throwing money at it! The extravagant spending on the national team must cease immediately. Instead, let’s focus on re-educating our players to understand that representing the nation means more than just a few tens of thousands of dollars; that there is a sense of pride in wearing the red, gold, black and green. Else without the right investment in football development and infrastructure, it would not matter how many millions we throw at them, they will never fully understand what’s at stake, let alone win it. A wise man once said, ‘Do not expect different results if you’re not prepared to change your way of handling things’. (Don’t ask me who said that. And no, I am not presenting my opinion as conventional wisdom).   By Atsu Tamakloe]]>
READ ALSO:  Appiah names 21 for Stars' friendlies in June