The move comes after a court annulled her diplomatic immunity in July. South Africa’s government was criticised for letting Mrs Mugabe leave the country after the alleged assault. Gabriella Engels accused Mrs Mugabe of beating the “hell out of me” with an electric extension cord in a hotel room in Johannesburg. Mrs Mugabe said at the time that she had acted in self-defence after the “intoxicated and unhinged” model attacked her in the room where her two sons lived. Police spokesman Vishnu Naidoo said on Wednesday: “I can confirm that a warrant for the arrest of Grace Mugabe was issued last Thursday.” He said police were seeking the assistance of Interpol to enforce the warrant. It is unclear why the reporting of the warrant was delayed and there has been no response yet from Mrs Mugabe or Zimbabwean authorities. Lobby group AfriForum, which has been pursuing the case, welcomed the arrest warrant. “It seems that justice is going to take place and we are looking forward to this matter going forward,” South Africa’s Times Live website quoted AfriForum CEO Kallie Kriel as saying. 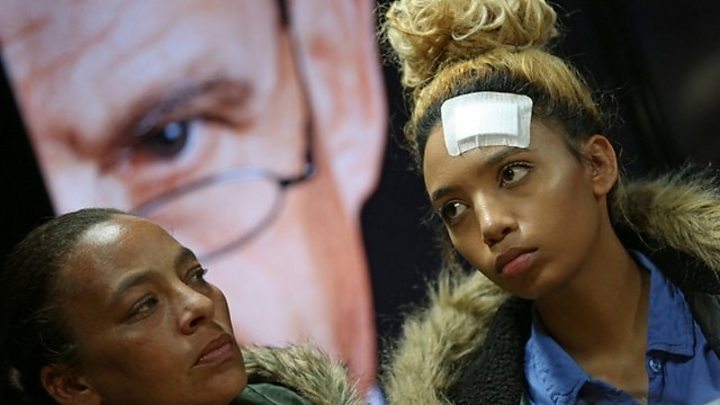 Media Model Gabriella Engels: Grace Mugabe “beat the hell out of me”
It is unclear whether South Africa will push for Mrs Mugabe’s extradition. The Mugabe family owns properties in South Africa. The alleged assault took place about three months before the military takeover in Zimbabwe, which saw Robert Mugabe resign as president after 37 years in power.
READ ALSO:  Grace Mugabe faction blamed for blast

What happened in Johannesburg?

The alleged assault took place in August 2017 after Mrs Mugabe found Ms Engels with her two sons, Robert and Chatunga, in a hotel room in Sandton, a wealthy suburb in the city’s north. The then first lady was in South Africa to be treated for an ankle injury, Zimbabwean media reported. Ms Engels released an image of a head injury online. “When Grace entered I had no idea who she was,” she told South African’s News24 at the time. “She walked in with an extension cord and just started beating me with it. She flipped and just kept beating me with the plug. Over and over. I had no idea what was going on. I needed to crawl out of the room before I could run away.” She added: “There was blood everywhere. Over my arms, in my hair, everywhere.” The South African Police Service (Saps) investigated the alleged assault but the foreign minister at the time, Maite Nkoana-Mashabane, granted Mrs Mugabe diplomatic immunity, allowing her to leave the country without answering questions. That immunity was annulled in July.

Who is Grace Mugabe?