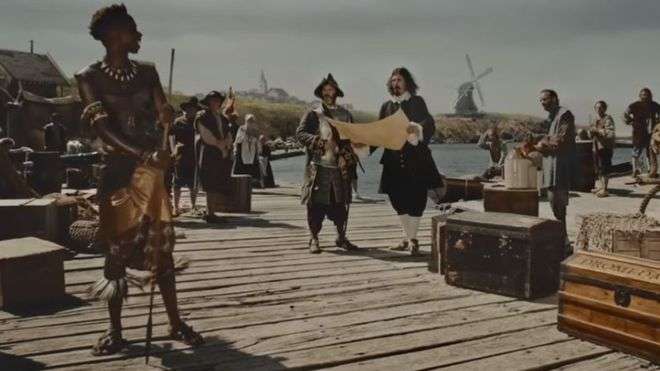 A fast-food outlet in South Africa has been ordered to withdraw a commercial showing an African explorer conquering Europe in the 17th Century.

The advertising board said colonialism was “traumatic” for Africans and was “not open for humorous exploitation”.

Chicken Licken said the advertisement was “tongue-in-cheek” and meant to create “pride” among South Africans.

The advert shows a young African, Big Mjohnana, leaving his village in 1650 to conquer his hunger for adventure.

His boat finally docks in Holland in 1651, and he says in South African slang: “Hello, white folk. I like this place. I think I’ll call it Eu…rope,” before stomping his spear to signal the land’s conquest.

The commercial ends with an elderly African man in a bow tie leaving a Chicken Licken outlet, and saying: “And that is the legend of Big John.”

South African Sandile Cele lodged a complaint with the Advertising Regulatory Board, arguing that the commercial made a “mockery of the struggles of the African people against the colonisation by the Europeans in general, and the persecutions suffered at the hands of the Dutch in particular”.

Upholding the complaint, the board said: “While the commercial seeks to turn the colonisation story on its head with Big John travelling to Europe, it is well-known that many Africans were in fact forced to travel to Europe in the course of the colonisation of Africa.

“They did not leave their countries and villages wilfully. They starved to death during those trips to Europe and arrived there under harsh and inhumane conditions.”

In its submission, Chicken Licken said it was regrettable that the advertisement had been construed as negative as it was intended to show that South Africa had “all the potential to conquer the world and rewrite history from an African perspective”.

On Twitter, many people tended to agree with the fast-food chain:

…but we did bring Civilisation to europe ( the Moor’s ) Why is this offensive!?
Chicken Licken’s ‘Big John’ Advert Has Been Banned Because It Makes A ‘Mockery of The Struggle Against Colonialism’ https://t.co/BSfg9s2pQe

#SouthAfrica the banned Chicken Licken ad. Why ban it? It’s hilarious and witty! People need to get a grip and get on with life, seriously https://t.co/VBmpqig9Pv

I liked it. I actually thought the ad was mocking how people thought they found South Africa in 1652. #ChickenLicken

Chicken Licken aren’t stupid. They couldn’t buy that amount of publicity. Now, if they were REALLY smart, THEY would have got someone to complain about it…….just saying……