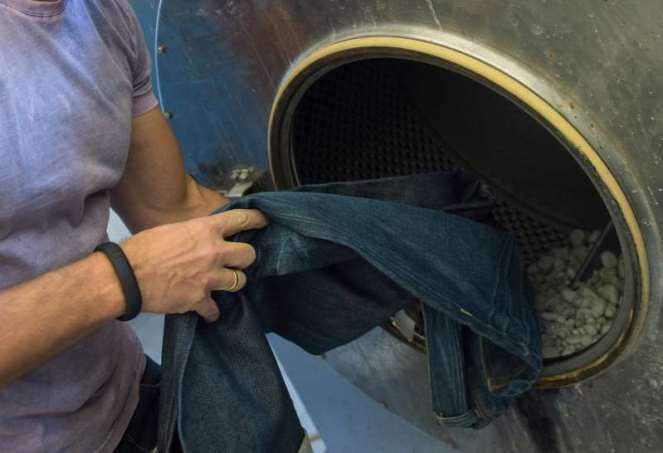 Almost everyone has an opinion about how many times you can wear jeans before tossing them into the washing machine. Some people argue that wearing denim more than three times is just gross. Others wear a single pair of pants upwards of 10 times before washing. A rare few, like Levi’s CEO Chip Burgh, forgo washing altogether to preserve the quality of their clothes.

Considering your body sheds more than 30,000 cells every day, it’s pretty disturbing to think about what lurks beneath the surface. So, we decided to look into whether all that dead skin and bacteria buildup poses any health risks.

But first, how often do you wear jeans before washing?

Roughly 63 percent of Men’s Health readers said their denim gets at least four uses before laundering, according to a Twitter poll. A surprising 37 percent claimed they never wear jeans more than three times before washing.

“One time is the only correct answer. Especially if you take any sort of public transportation, one Twitter user told us.

Overwhelmingly, most people wore jeans for a pretty long amount of time. In fact, 23 percent admitted to wearing jeans at least 10 times before washing.

OK, but is it a health risk to wear dirty jeans?

Wearing dirty jeans more than 10 times before washing sounds pretty gross. However, your chances of developing bacterial infections is pretty low, says Dr. Steve Xu, M.D. and instructor in the department of dermatology at Northwestern University Feinberg School of Medicine.

“The skin is a pretty good barrier against infections,” he tells Men’s Health. Most healthy guys don’t need to worry if they avoid doing laundry.

But there is the chance you may develop jock itch, or a fungal infection in your genital region, according to Dr. Adrienne Haughton, M.D. and director of clinical and cosmetic dermatology at Stony Brook Medicine.

“A lot of men will have athlete’s foot,” she explains to Men’s Health. If you don’t wear socks before putting on your underwear, the fungus can be transferred onto your groin area and move onto the jeans. The fungus will continue to grow if your pants go unwashed.

“Just regular walking and moving around, the fungus is just going to keep growing,” she says.

Guys with eczema, open wounds, or even just dry skin are more likely to develop a bacterial infection, she says. More commonly, oil in your pants could cause acne or folliculitis, she says.

So, how often should I wash jeans?

According to Haughton, there aren’t medical guidelines detailing how often clothes should be laundered, so it really is up to personal preference. Cleaning expert Jolie Kerr recommends washing after every five to 10 wears, according to Esquire. If you really want to maintain the longevity of denim, always turn clothes inside out and opt for hand washing.