Who knows what the show would have entailed – although many expected it to rival her sister Beyonce’s celebration of black culture at the previous year’s Coachella. But, judging by the star’s transcendent headline set at London’s Lovebox Festival, elaborate staging would have been superfluous anyway. Over 60 minutes of otherworldly, socially-conscious soul, Solange performed with a sense of freedom and joy that elevated both the material and the audience. The star concentrated largely on her recent fourth album, When I Get Home – a series of fleeting sketches of her hometown, Houston, Texas. It’s an abstract, complex record, with none of the instant hooks of its predecessor, 2016’s A Seat At The Table. But the audience, instead of being alienated, seemed enraptured by the snaking, jazz-like arrangements, and Solange’s sunlit harmonies. Wisely, the singer peppered the set with more-recognisable songs from her back catalogue – the street funk of Losing You, and the soaring ballad Cranes In The Sky – and threaded the new record’s most memorable earworm, Things I Imagined, throughout the set as a musical motif. The band was crisp and clear, with a brass section that brought a fresh, New Orleans vibe to the material; highlighting Solange’s more political lyrics, without making them seem heavy-handed. 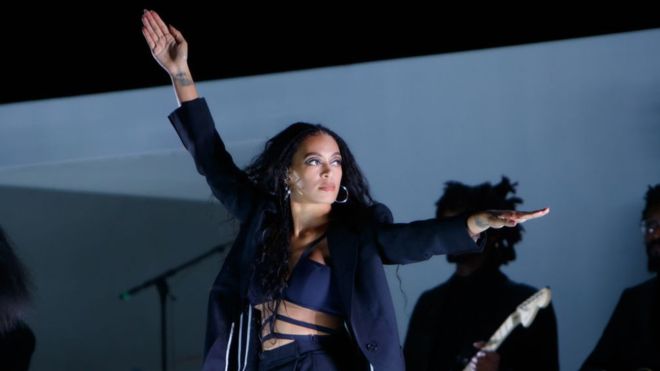 “If you’re supremely black and popping, make some noise tonight,” demanded the star, before playing another album highlight Almeda, in which she proudly and pointedly recited: “Black skin, black braids / Black baes, black days / These are black-owned things / Black faith still can’t be washed away.” The audience may not have been as diverse as the singer is used to at home, but a sizeable amount chanted the song’s refrain: “blackberry the masses” (a play on the idiom, “the blacker the berry, the sweeter the juice”) with heartfelt conviction.
READ ALSO:  Rwanda angry over London arrest of spy chief Karenzi Karake
Medical problems Anyone who has seen her videos will know Solange is a fan of cyclical movement – slow, deliberate choreography, with bodies falling in and out of sync. That was present on Friday night, too, as the star and her backing singers tossed their hair back and forth in intricate unison; and her dance troupe rippled with movement across the stage’s simple, stepped platform. More engaging, though, were the unscripted moments: Solange lassoing her microphone around her head in the middle of Down With The Clique, or striding the audience barriers during FUBU (the audience responded by pressing their phones into her face, with total disregard for personal space). Best of all, during the extended encore of Things I Imagined, the singer simply rolled onto her back and started performing bicycle kicks in the air. It was a moment of pure, spiritual bliss. One which, the singer explained, she nearly didn’t get to experience. “It was actually at Lovebox two years ago I started to lose control of my body, I started go through some really crazy health issues,” said the 33-year-old, who was diagnosed in 2017 with an autonomic nerve disorder, which can affect everything from your heart rate to your cognitive functions. “I remember being in the hospital that morning and them telling me I was not to perform or leave… and I remember bringing my black ass right here to Lovebox,” she added. “Lovebox is the festival that I get to come and see all these black and brown faces and I ain’t missing that for nothing. “Tonight, it feels so good.”
READ ALSO:  Can hit songs be worth more than gold?
Source: BBC ]]>