October 15th 1987. Burkina Faso’s revolutionary leader, Thomas Sankara had gathered at the Conseil De L’Entente with a handful of his trusted aides. He was receiving reports on various assignments he had put his men to. It was a familiar exercise he usually undertook. At the courtyard of the building were his driver and two bodyguards. They were the first victims. Sounds of the spraying bullets echoed into the meeting room. Sankara stood up and told everyone to stay put. “It is me they want,” he is reported to have said. He walked out of his last supper to face his adversaries, hands in the air.  The bullets immediately found their target. About a dozen riddling his body. But the adversaries were not done. They stormed the building and sprayed it with more bullets. Twelve of  Sankara’s disciples fell that fateful day, excerpt one—Alouna Traoré. He survived the massacre and lived to tell the story. The assassination occurred around 4:30pm. Later that evening, Sankara’s close friend and deputy, Blaise Campoaré, widely believed to have orchestrated the hit, was declared president. The coup was complete.  He would stay in power for the next 27 years. Years the name Sankara could hardly be publicly mentioned in Burkina Faso. Not anymore. In February 2019, the new Burkinabe government held a special event at the sidelines of Africa’s biggest film festival, FESPACO, to unveil a five-meter bronze statue of Sankara at the site of his murder. The unveiling of the memorial is a first step in a grand plan to build an ultra-modern mausoleum in honour of  Sankara. “It is a well-deserved tribute to the man who was the father of the democratic and popular revolution,” said Burkinabé president Roch Marc Christian Kaboré who is working to restore the legacy of Sankara. An International Memorial Committee, with Ghana’s former President Rawlings as honourary chair, has been established to oversee the process. President Kaboré has also indicated that his government is working to bring the perpetrators of the ‘87 assassinations to book. [caption id="attachment_127215" align="alignnone" width="624"] 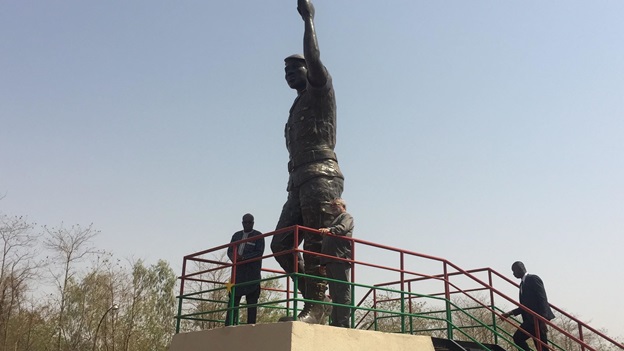 Statue of Sankara with President Kabore and former Ghana President Rawlings in shot[/caption] In honour of his fallen comrade, Ghana’s own revolutionary leader, President Rawlings, named the first major interchange in the city of Accra after Sankara. Overtime, Sankara Circle has morphed into the national conscience as a familiar landmark. Although the interchange was renamed Ako-Adjei Interchange in 2002 by President Kufuor, many people still refer to it simply as Sankara. “We have emotions on this site, but we need to capitalise on these emotions to move forward. Those who fell here remind us that we are fighting for freedom and justice,” said President Rawlings at the event in Ouagadougou to unveil Sankara’s monument. For Alouna Traoré, who was at the unveiling, the monument represents a rebirth of his iconic comrade. “This is for the new generation,” he says. “We are expecting that not only will they embrace the ideas of Sankara but also his actions.” Toure speaks with such great conviction that it is almost difficult to imagine for three years after Sankara’s death he could barely utter a word. “1988, 1989, 1990; every year was like 1987,” he says. “Thomas is not dead. He is not dead.” For a brief moment, there is a whiff of that intense depression that took hold of Traoré after the assassination. Beyond Sankara, he had also lost six of his close friends that day. But he recovers his enthusiasm. “I am the gift of all the newspaper writers,” he says. Traoré is glad he lived to tell the world what happened. He is even more excited that he has lived to see the restoration of Sankara’s legacy. [caption id="attachment_127212" align="alignnone" width="337"]

Alouna Traore[/caption] In 2006, British filmmaker Robin Shuffield produced what has become a very important feature documentary on Sankara titled Thomas Sankara: An Upright Man. In the documentary, President Rawlings describes Sankara as a very impatient person “But that’s understandable.  Because when you live in the kind of impoverishment, the kind of hunger that our people live through, you cannot afford to be patient,” Rawlings said. The impatience of Sankara is, perhaps, evidenced by his achievements in the four years he served. As outlined in Shuffield’s documentary, Burkina Faso achieved food self-sufficiency. Millions of trees were planted in a reforestation campaign. Millions of people were vaccinated against communicable disease in record time. Government institutions were restructured to cut out waste and corruption: no first class travels, no luxury vehicles, pay-cuts for all senior officials.  A massive empowerment project for women was instituted and a sense of pride, dignity and purpose was instilled in the Burkinabé people. Karidia Friggit, honourary consulate of Burkina Faso in Madrid, is one of the women who benefited greatly from Sankara’s empowerment project. In 1986, She was sent to the University of Ghana with other students for an educational exchange. “After Burkina Faso, Ghana is the second country in my heart,” she says fondly.  Friggit believes that Sankara’s ideas are still very relevant. “We want the memory and ideas of Sankara to survive,” she says. “One of his ideas I really love is his call for us to rely on ourselves; to produce what we consume and to consume what we produce.” Sankara campaigned tirelessly for Africa’s self-sufficiency and the dismantling of imperialist structures. In one popular video of his on Youtube, he is seen explaining to an excited audience what imperialism is. “Some people ask me where is imperialism?” he said. “Just look in your plate when you eat: see the imported corn, rice, millet—that is imperialism. No need to go further.” In another animated speech to the then Oraganistion for African Unity (OAU ) in Addis Ababa, in July 1987, Sankara charges his colleague heads of state to intensify local production to prevent Africa from relying on imports. “Burkina Faso has come here to show you our locally produced cotton woven in Burkina Faso, tailored in Burkina Faso, to clothe our people. My delegation and I are dressed by our tailors, our farmers; not a single thread comes from Europe or America,” said Sankara to resounding applause. As a boost to the local cotton industry, Sankara issued a directive for all public servants to wear locally produced clothes to work. Some of these public servants would wear western clothes to the offices with their local attires in their bags in case Sankara were to make an unannounced stop, as he was wont to do.  Thus a particular fabric design became known as ‘Sankara-is-coming’. Friggit beams with great pride as she talks about Sankara. She recollects, with a rush of excitement, an occasion with the president at the Ghana embassy in Ouagadougou. The ambassador had invited exchange students for an anniversary celebration of Ghana’s independence and Sankara was a special guest. He interacted greatly with the students.  Friggit shares a prized picture of the occasion with the students hurdled around their revolutionary leader. [caption id="attachment_127213" align="alignnone" width="386"] 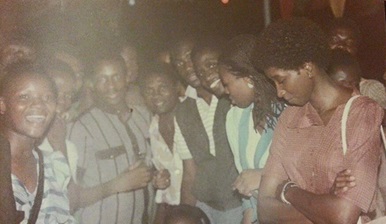 Karidia Friggit, Second from right, in a group picture with Sankara at Ghana Embassy in Ouagadougou. 1987[/caption] Not long after she returned to Ghana to continue her studies, Sankara was killed and his government overthrown. The coup plotters cited Burkina Faso’s deteriorating relations with some of its international partners, particularly France and Ivory Coast, as justification for the takeover. Many, however, believe Sankara’s radical ideas and transformation drive made him a threat to western interests. Like Nkrumah and Lumumba, they believe his overthrow was orchestrated by foreign actors with local collaborators. “I recall the Ghanaian students were calling us Murderers! Murderers! Murderers!”  says Friggit. “We said No! But they accused us of not doing anything.” Friggit agrees that they couldn’t do much to stop the coup. The soldiers put a military unit close to the university and many students were taken away with their fate unknown. “It was impossible to gather. We didn’t have the communication technology like today,” she says. Not only could Sankara supporters not do anything to resist the coup, they couldn’t do much for his legacy either for the 27 years Blaise Campoaré was in power.  There was a deliberate attempt by the Campaoré regime to erase the Sankara legacy and memory. “Many young people are dreaming of the time Sankara was president because some of us have been telling them about what he did,” says Friggit. It was those same young people, tens of thousands of them, chanting Sankara slogans, in October 2014, who stormed the streets and burned the parliament building as Campoaré attempted to change the constitution so he could run for president again. He relinquished power and fled the country. The people had finally resisted. After 27 years. “Thomas said if you kill me a thousand more Sankaras will rise,” says Traoré. He is seized by a renewed sense of hope, energy and purpose. “This is for the new generation,” he continuously stresses. “We are expecting a new Sankara. We believe that he will come. He will come.” [caption id="attachment_127214" align="alignnone" width="309"] 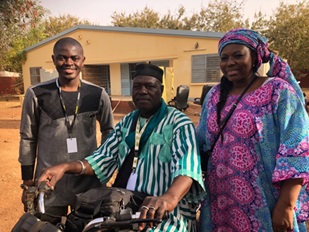 Where is the secret foreign bank account people claimed Rawlings had? – Afriyie Ankrah