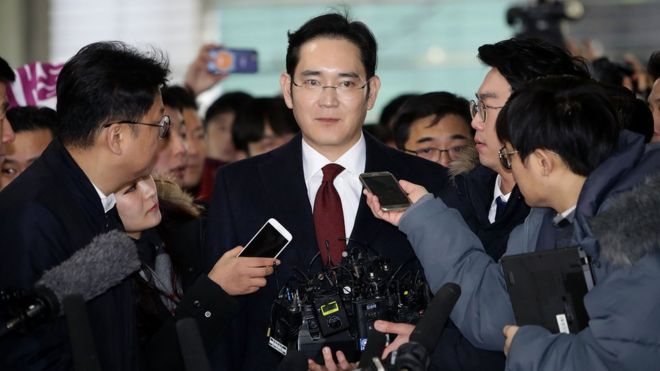 The trial of Samsung’s de facto head Lee Jae-Yong on a string of corruption charges including bribery and embezzlement has begun in South Korea.

Mr Lee was not present at the preliminary hearing, but his lawyer denied all charges on his behalf. The case is linked to a massive scandal that led to the impeachment of South Korea’s President Park Geun-hye. Four other Samsung executives who are also facing trial have also denied wrongdoing. The trial is expected to go on for several months.

The case against Lee

Mr Lee, also known as Jay Y Lee, is currently vice-chairman of Samsung Electronics. But since his father, Lee Kun-hee, suffered a heart attack in 2014, he is considered de facto boss of the entire Samsung Group conglomerate. He is accused of giving donations worth 41bn won ($36m;£29m) non-profit foundations operated by Choi Soon-sil, a friend of Ms Park. Prosecutors have alleged this was done to win government support for a big restructuring of Samsung that would help a smooth leadership transition in favour of Mr Lee. In a December parliamentary hearing, Samsung admitted giving a total of 20.4bn won to two foundations, but denied seeking favours in return. Mr Lee also confirmed the firm gave a horse and money to help the equestrian career of Ms Choi’s daughter, Chung Yoo-ra, something he said he now regrets.

Ms Park’s position began to unravel in October last year when details of her friendship with Ms Choi emerged. They included revelations that the president had allowed her old friend – who holds no government role – to edit political speeches. Politicians voted in December last year to impeach her over the scandal. South Korea’s constitutional court is expected to rule shortly on whether that decision will be upheld. Until then, Ms Park remains formally president but stripped of her powers. Ms Choi is on trial for charges including corruption and coercion. Ms Park denies wrongdoing but has apologised for the way she managed her relationship with Ms Choi, who also denies committing criminal offences. Source: BBC]]>
READ ALSO:  SA President Zuma sacks Finance Minister