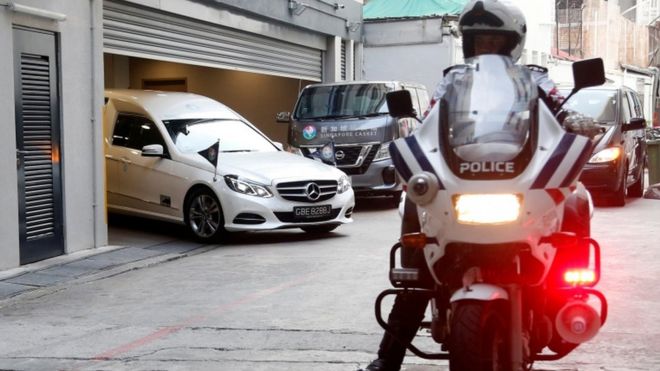 The body of Robert Mugabe has left Singapore on a private flight destined for his home country of Zimbabwe.

The former president had been receiving hospital treatment in the city state before he died last week aged 95. Mr Mugabe was Zimbabwe’s first leader after becoming independent in 1980. He held on to power for almost four decades before being ousted in a coup in 2017. He will be buried on Sunday after a state funeral on Saturday. A hearse carrying Mr Mugabe’s body left a Singapore funeral parlour, accompanied by police motorbikes, bound for the airport on Wednesday morning. The specially chartered flight carrying Mr Mugabe’s body is expected to land in his home country at 15:00 (13:00 GMT), family members told Reuters news agency. Mr Mugabe is then expected to lie in state at Rufaro Stadium, in Mbare township in Harare, where he once took the oath of office. His official state funeral will take place at the 60,000-seat venue. Mr Mugabe’s final resting place remains unclear amid reports of disagreements between his family and President Emmerson Mnangagwa’s government. Source:BBC]]>
READ ALSO:  Mahama sad about ‘legend’ Mugabe death

Debt Exchange: Investors have to agree to touch their funds –...

Some girls sleep with men for money to buy sanitary pads...