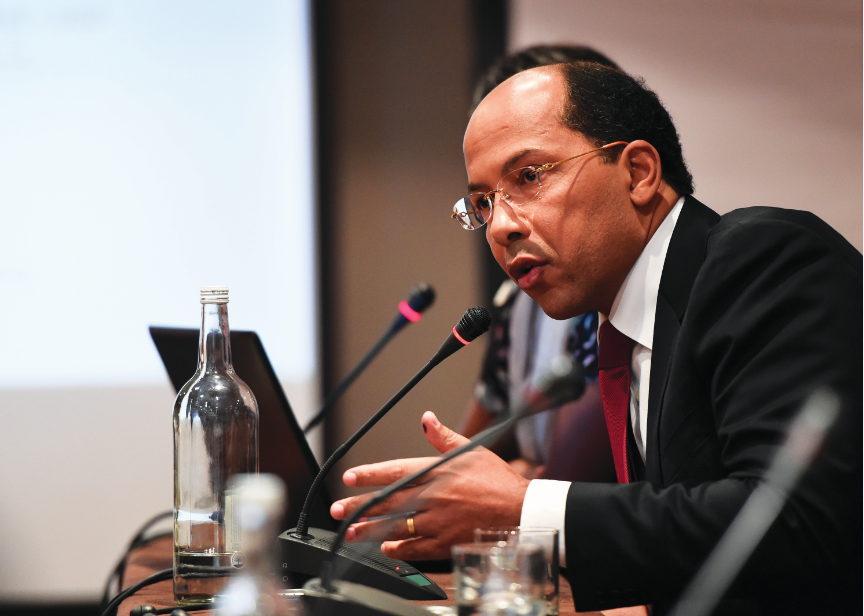 Nicolas Pompigne-Mognard[/caption] The media landscape has changed dramatically over the last decade. As a result, newsrooms have been forced to make monumental changes such as reducing the staff complement to keep up with the demands, or they have simply had to shut down.

With some African newsrooms being written out of history, there has been an emergence of international media setting up shop on the continent. This interest serves as a double-edged sword for African media that often finds itself under-resourced.

Nicolas Pompigne-Mognard, the founder and chairman of the APO Group, is of the view that the African media landscape has faced challenges that precede digital migration, which has compounded existing problems. An incident that stands out for him, before the digitizing of media, was a lack of access to information for African reporters, and that propelled him to start one of the foremost media relations firms on the continent.

When he was a journalist for online publication, Gabonews, and the deputy president of the Pan-African Press Organisation in France, between 2005 and 2007, Pompigne-Mognard says this was a recurring problem hampering the productivity of African reporters.

“If you wanted the right to attend an international press conference, you would need an official card.

“As an African correspondent, the only way for you to have that card and get access was to prove that you were getting at least €1,000 ($1,121) of earnings, and most of them didn’t have that,” says Pompigne-Mognard.

“It was rooted in disparity. If you have two journalists and one of them has the right card and the other doesn’t, then of course, the other one cannot do his job. He cannot earn money or write articles.

“More than that, it reinforced the dependence of African media on international media. They had no other choice but to rely on the information provided by the biggest media.”

To remedy the circumstances that seemed to disempower his peers on the continent, Pompigne-Mognard founded APO from his living room, using $11,000 in savings.

APO has grown since its inception as it provides a variety of media offerings such as press releases, videos, photos, documents and audio-files.

The company has sources such as global Fortune 1,000 companies, reputable international and Africa-based PR agencies, governments and international institutions.

“I didn’t start it to make money. I didn’t start it as a business. I wasn’t an entrepreneur at the time. I was a journalist and I wanted to address a problem. At the beginning, I wasn’t even aware that companies were paid to distribute press releases.”

Pompigne-Mognard has since realized many things through the medium of his company as APO delivered growth of 60% in 2018, representing a turnover that has more than doubled in two years.

As a correspondent of Gabonews, before the inception of his company, Pompigne-Mognard was covering Europe, and he had to report Africa-related news and needed information. As a result, he would ensure he was receiving as many press releases as possible; however, this came with its own logistic challenges.

“That’s when I realized it was extremely difficult to actually ensure I received all the press releases from institutions like the United Nations, as an example. There was not one point where I could get all the African information issued by the international system.

“Journalists had to rely on information that was on websites. It was very time-consuming to get access to all the content…

“It got me thinking about how if international media was not receiving information from our most important institutions, then what does that say about our voices in the world?”

“I had a serious meeting with the president of the African Development Bank at the time, Donald Kaberuka, and he told me something that was instrumental because that’s when I decided I wanted to do something about it.

“What he told me is that the destination of information about African economies contributes to the growth of the continent, because at the time everybody was talking about poverty, war and struggle.”

Over the years, Pompigne-Mognard has observed a similar trend in the way press releases are compiled and disseminated.

He feels this has contributed in transforming the narrative on Africa.

“Something that is specific with press releases is that 95 percent of them convey good news. Usually, when a company issues one, it is to say that they are appointing a new CEO, they are opening a new branch, or they are expanding into new markets.

“We (APO) have been participating, for several years now, in changing the African narrative. We are in a unique place where we have a chance to influence the narrative and make sure that Africa has its own voice and is not influenced by the bias of international media.

Although information is accessible to those who seek it, he says there is currently another challenge that African media needs to resolve in order to maintain autonomy and make money to sustain itself.

“I think there is a big problem coming towards us and it is coming fast,” says a concerned Pompigne-Mognard.

“As an international company, why would I deal with five national TV stations in different countries, if I can approach a single international station and get, not only those five countries, but also better coverage?”

Pompigne-Mognard says the continent is ripe with potential and international media companies, which have observed the budding possibilities, are striking while the iron is hot.

“They know the population is going to grow, the middle class is growing and that purchasing power is growing.”

Finances remain a colossal inhibiter to the growth of newsrooms, as many have had to retrench to make ends meet.

The ripple effect is that the quality of the content produced eventually suffers.

“On a global scale, the media landscape is in a challenging position. It has become very difficult to finance content and to find new ways to make money. Africans also have the same challenges, but often they don’t have the same means or resources.

“I would prefer to be wrong on this matter, but if I’m right, in 15 years’ time, the media landscape in Africa will be completely different – in a bad way.

“I want Africa to have a strong media landscape. But in order to do that, people need to understand that media companies need to be run as businesses.”

But it’s not all doom and gloom for African media; Pompigne-Mognard sees hope. He says the status quo can be reversed if there is a joint effort to curb the problem.

“One of the solutions is to create pan-African media,” he says. “The person who is going to crack the code and make it happen could be extremely rich. It doesn’t have to be [entirely] pan-African, even 30-35 countries are more than enough.

“There’s a thing about Africa which is a strength and a weakness; it’s that doing something here will always be more difficult. But the good news is that for those who manage to do that thing in Africa, they can do it anywhere.”