Kawhi Leonard was named the NBA Finals Most Valuable Player, averaging 28.5 points, as the Raptors won the best-of-seven series 4-2. “It was heck of a 12 months,” Toronto head coach Nick Nurse said after his side clinched a first title in their 24-year history. “This is why I play basketball; this is what I work hard for,” added Leonard. The Warriors, who headed into the finals with back-to-back wins and had won three of the past four NBA titles, were without the injured Kevin Durant and lost Klay Thompson to cruciate knee ligament damage in the third quarter. Steph Curry had a chance to tie the series with a missed three-pointer when the Warriors trailed 111-110, before Leonard sealed the victory for the visitors. The Raptors are the first Canadian club side to win a major North American sports title since the Toronto Blue Jays captured Major League Baseball’s World Series in 1993. Leonard becomes a Toronto legend 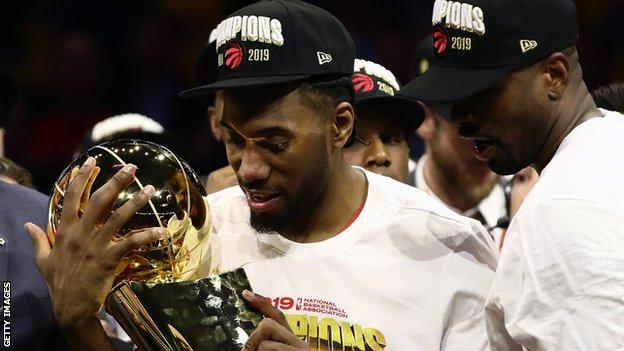 Leonard – the Raptors’ leading scorer in his debut season – joined Kareem Abdul-Jabbar and LeBron James as the only players to be named the NBA Finals’ Most Valuable Player (MVP) with two different teams. The forward, MVP with the San Antonio Spurs in their championship-winning 2014 season, is the only player in history to receive the accolade in both the Eastern and Western Conferences. From Derby, Birmingham & Brighton to the NBA Finals Nurse’s triumph came one day short of the first anniversary of his appointment as head coach. The 51-year-old, from Iowa, had been the team’s assistant coach since 2013, before being promoted on 14 June last year. “It was heck of a 12 months,” said Nurse, who has coached extensively in the British Basketball League, with stints at Derby Storm, Birmingham Bullets, Manchester Giants, London Towers and Brighton Bears. He led the Bullets and Giants to the league title and twice won the BBL coach of the year award, working on a £100,000 budget – in contrast to the $150m (£120m) he has to spend at the Raptors. Injuries devastate Warriors

In game five, an injury-riddled Warriors side welcomed back Durant – the two-time NBA Finals Most Valuable Player – after a month-long absence, only for him to rupture his right Achilles tendon. Thursday’s game six then saw three-time NBA champion Thompson – who had already scored 30 points – forced off in the third quarter with a torn anterior cruciate ligament in his left knee. Both Durant and Thompson could be free agents next season, meaning the Warriors’ roster may change drastically. “Injuries are always part of the NBA season. It’s just the severity of these injuries,” Warriors coach Steve Kerr said. “What matters is Kevin Durant is going to miss next season with an Achilles tear and Klay suffered a knee injury. It’s just brutal what these guys are dealing with right now. “When Klay goes down and is out for the game, it’s just sort of: ‘You got to be kidding me, this has to stop.’ But it’s just the way it has gone. “I don’t know if it’s related to five straight seasons of playing 100-plus games and just all the wear and tear, but it’s devastating.” Brothers make NBA history 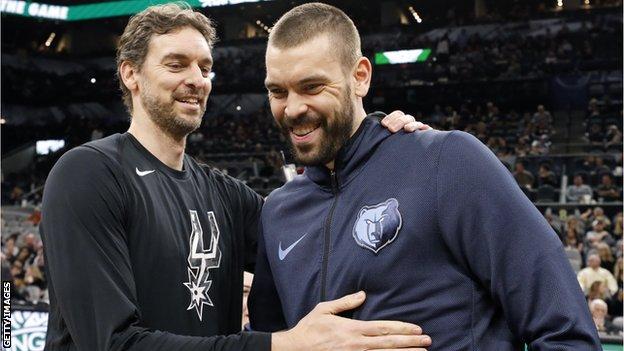 On a historic night, Marc and Pau Gasol became the first brothers to both win an NBA championship. Pau, 38 won back-to-back titles with the Los Angeles Lakers in 2009 and 2010, and has made six NBA All-Star appearances. Brother Marc, 34, who joined Toronto in February, beat his Milwaukee Bucks sibling in the Eastern Conference Finals. “It’s a dream to have achieved this,” Spanish center Marc Gasol said. “I’ve never worked so hard.” In an interview with Spanish newspaper Marca before game six, Pau said: “Marc and I have been so lucky throughout our lives to have achieved things that we would never have imagined in our wildest dreams as kids.” Warriors bid farewell to Oracle It was the Warriors’ final game at the Oracle Arena – their home in Oakland, California, for 47 years – before they move to the $1bn (£789m) Chase Center in San Francisco. The Warriors had been hoping to mark the occasion with a win to force game seven. Golden State forward Draymond Green, who scored 11 points, said: “Everybody on this team played with a lot of heart. We just came up a little short.” The end of the ‘Drake curse’? Superfan and Raptors ambassador Drake, regularly seen courtside at Toronto’s Scotiabank Arena, opted out of a trip to the West Coast, choosing to watch game six back home in Maple Leaf Square – nicknamed Jurassic Park – with thousands of fans. Previously, the rapper has become notorious for the ‘Drake curse’ – his unfortunate habit of being photographed with some of the world’s biggest sports stars just before they lose. Most recently, he was pictured alongside British heavyweight boxer Anthony Joshua… and we all know how that ended. But after a historic Raptors win, has the curse finally been lifted? Source: BBC ]]>

Nigerian basketball: From beating USA to begging for Olympic kit

Hedidor’s Folder: The indiscretion and verbal diarrhoea of a regional minister...

Milo’s return: A quick fix but will it work?