The meeting comes on the heels of the conclusion of a technical due diligence exercise carried out by TRANSNET on the Western Rail lines.

Early this month, a technical team from TRANSNET with assistance from their counterparts at the Ghana Railways Company Limited carried out a technical due diligence on the Kojokrom-Tarkwa narrow gauge.

The exercise was further extended to the Huni Valley, Awaso and to some extent the Kumasi lines.

The team also took a look at the operability of Ghana Railways Company’ current rolling stock which includes coaches and wagons.

The meeting, in South Africa, will afford TRANSNET the opportunity to brief the Minister and his team on the findings of the technical due diligence on the Western Rail Line.

The minister and his team will also look at the rolling stock manufacturing company of TRANSNET as Ghana considers the possibility of acquiring coaches and wagons from the company.

This was contained in an agreement President Nana Addo Dankwa Akufo-Addo and his South African counterpart, Cyril Ramaphosa, signed on the rehabilitation of the Western Rail line when they met in Accra last year.

In an interview with 3news.com from South Africa, Joe Ghartey explained that the meeting with Transnet will also explore other future collaborations all aimed at reviving the Western Rail Line.

“As you are aware the Nana Addo government signed an agreement with TRANSNET for the upgrade of the Kojokrom to Tarkwa line. Thankfully, the Tarkwa line is now operational. TRANSNET will come and help us strengthen the line further. They will also help strengthen our operations, the systems and everything else that goes with running a successful railway company. A railway company is not just the line.”

He said when officials of the South African firm came the last time, “they looked beyond Tarkwa, and did a survey after Awaso”.

“We are meeting with them to see their findings. They’re going to give us their findings also on the Tarkwa line, and what they believe has to be done.”

An elated minister said currently so many discussions are ongoing between government and rail construction companies all aimed at not just reviving the rail sector but also to make it very attractive, profitable and self-sustaining.

“Currently, government has rehabilitated the Takoradi-Tarkwa narrow gauge line. And for close to a month now there has been an active passenger service on it. You saw the number of people who are patronizing the service. It can get better and we will make it better. Now, government is seeking to develop a new standard gauge Western line while considering the rehabilitation of the remaining old narrow gauge. Amandi is developing the new standard gauge to Huni Valley whilst Afcons, the company constructing Tema to Mpakadan, has also been awarded a contract to commence development of the new standard gauge Western line from Kumasi to meet Amandi.”

He revealed that there are plans to develop a new standard gauge line along the entire stretch of the Western line to Awaso, Kumasi and to extend it further to Nyinahin.

The Ghana Railway Company Limited (GRCL) has announced the suspension of Takoradi-Tarkwa commercial service with effect from Monday, March 2.... 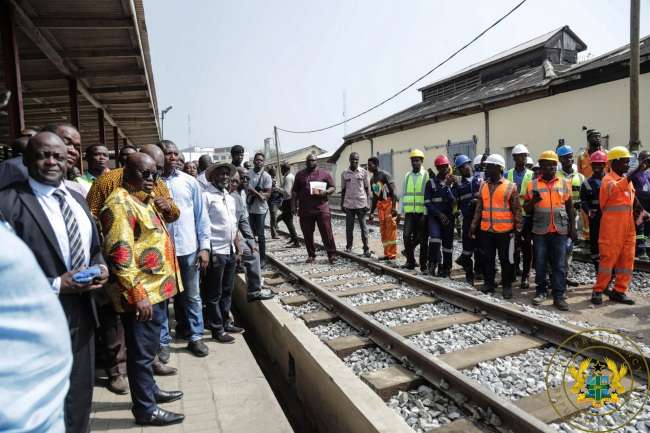