“Push for legislation on alcohol” 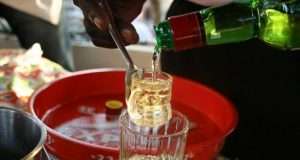 Civil society groups campaigning against alcohol abuse have been challenged to push for a Legislative Instrument (LI) to back the law on alcohol use in the country.

The Chief Psychiatrist, Dr Akwasi Osei, who threw the challenge said there were a number of issues that could not be effected without the LI.

Launching the Ghana Alcohol Policy Alliance (GhanAPA) in Accra yesterday, Dr Osei said alcohol abuse was a big health issue in the country which required that it was addressed in depth.

GhanAPA is a network of civil society organisations working on alcohol prevention, treatment, rehabilitation and control in Ghana.

The alliance is affiliated to the West African Alcohol Policy Alliance (WAAPA) and the Ghana Non-Communicable Disease Alliance (GhNCDA).

Dr Osei said even though policy makers had the responsibility to pass the LI, the onus rested on CSOs to push and bring them to fruition.

“You have a big role to play as an alliance. Policy makers will always look at what money they are going to lose as against the public interest.

“Therefore, policy makers on their own will not want to do anything against it because alcohol brings money. So we have a big role to play as an alliance, and let’s not leave the responsibility to the government only,” he said.

He said for instance, because there was no LI, advertisements on alcoholic beverages were being aired from 8 p.m., adding that with the coming into force of an LI, the time for advertising alcoholic drinks would be shifted to much later, say around 9.30 p.m.

Dr Osei said alcohol did a lot of damage to the organs of the body and, therefore, urged CSOs in the country to recommend changes to cultural activities that required the use of alcohol.

“Some hide behind culture to engage in alcohol abuse. We must influence culture, otherwise culture will influence us,” he said, adding that there were some cultures in the country that did not include alcohol in the payment of dowry and bride price.

He said every drop of alcohol taken caused some damage to the body, “so it is not true that alcohol makes people strong or powerful”.

The Head of Legal at the Food and Drugs Authority (FDA), Mrs Cynthia Dapaah, said there was the need to put in place checks and balances on the activities of local alcoholic drink producers. She, therefore, urged CSOs to share data on alcoholic drinks produced locally.

She expressed concern about the profuse advertisements on alcoholic drinks which, she said, promoted sex. She encouraged the society “to begin to protest that we don’t want this. We don’t want women who are nude on our televisions”.

Mrs Dapaah said it was against the FDA policy to site a pub 200 metres to an educational facility, and called on Ghanaians to report any such finding to the FDA for action to be taken.

She announced that the FDA was drafting a regulation on alcohol that would touch on everything to do with alcohol, adding that: “It is our wish that alcohol is banned,” but admitted nonetheless that as an institution, the FDA did not have the power to do so.

The National Coordinator of GhanAPA, Mr Benjamin Anabila, said it was the intention of the organisation to inform the public of the risks involved in abusing alcohol but was not calling for a total ban.

He said it was the alliance’s solemn pledge to offer help to people in the habit of abusing alcohol, as well as get persons dependent on alcohol to quit and be rehabilitated.

Mr Anabila said the alliance, also, had the objective of bringing together organisations working in the area of health and advocacy for a coordinated programme against alcohol abuse.