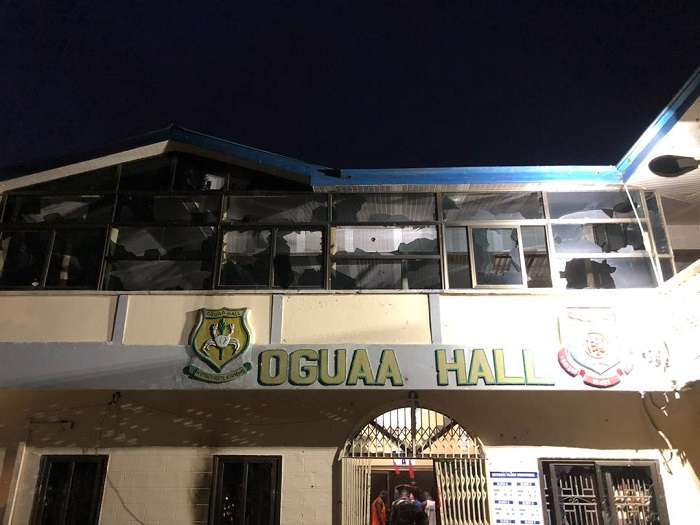 Several property were left vandalized and some students injured as a free-for-all fight erupted between students of Atlantic Hall (ATL) and Oguaa Hall of the University of Cape Coast (UCC) Friday night.

It is unclear what triggered the fight but an eye witness said it started after some students of ATL beat up another from Casely Hayford Hall (CASFORD).

The CASFORD student had come to visit a friend at Oguaa Hall, which was marking its Hall Week celebration.

The incident sparked a free-for-all fight, leading to the vandalisation of property.

Campus security called in to arrest the situation had to retreat, 3news.com gathered.

The Mariners, as ATL students are called, attempted setting fire to Oguaa Hall, a student told 3news.com on Saturday.

Speaking on anonymity, the Level 200 student said the Mariners torched a motorcycle.

They took an Indomie seller’s gas cylinder,  the student eye witness said, and set fire to it in an attempt to “bomb” Oguaa Hall.

Already, some students have been arrested to aid in investigations.

The Vice Chancellor of UCC, Professor Joseph Ghartey Ampiah, is also said to have warned that any student found culpable will face the full rigours of the University’s laws including being surcharged for the destruction caused to property.

The University of Cape Coast has become virtually empty after management gave students up to Saturday March 21 to go...

UCC mgt to deal with perpetrators of violence & vandalism