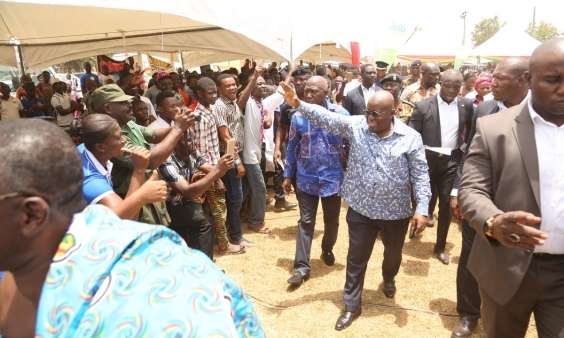 President Nana Addo Dankwa Akufo-Addo has cut sod for the construction of a multi-purpose two-storey regional administration block for the Food and Agriculture Directorate in Nkwanta in the Oti Region.

This forms part of his two-day tour of the Region to familiarize and show commitment of his government’s readiness to extend development to every nook and cranny of the country.

The multi-purpose structure, which is for decentralized departments in the Oti Region, is expected to be completed in eight months.

The block when completed would have a conference hall as well as offices, storage area and a lift for people with disabilities.

The President, who earlier addressed a durbar of chiefs and people of the Atsorde Traditional Area in the Nkwanta Municipality, assured them of his government’s preparedness to ensure that his campaign promises are fulfilled but asked for unity amongst the people, saying development thrives in an atmosphere of peace.

On the Free SHS policy, the president said he has put the doubting Thomases to shame.

The Paramount Chief of Akyode Traditional Area, Nana Obonbo Sewura, who commended President Aufo-Addo for fulfilling his campaign promises, however, enumerated some pertinent challenges bedeviling them.

He wants those challenges to be addressed as quickly as possible.

The Oti Region Minister, Kwasi Owusu Yeboah, noted that the creation of additional six regions makes it a must to ensure that infrastructural needs of these regions are met without any hindrance.

The Road Minister, Kwesi Amoako-Atta, who highlighted on the construction of a road network in Oti particularly mentioned the reconstruction of the 47-kilometre Dode-Pepesu-Nkwanta stretch.

The Presidents tour began with a durbar of chiefs and people of Akyode Traditional Council and cutting of sod for the construction of Regional Agriculture Directorates in Nkwanta Municipality.

He also commissioned a business resource center at Kadjebi.

Give ‘Elephant’ 4 more to do more for you; ‘Umbrella’ has nothing – Akufo-Addo

DKM customers to receive their deposits by October – Akufo-Addo