The anxiety and trepidation among authorities of the Atwereboanda M/A Junior High School in the Prestea Huni Valley Municipality of the Western Region over closing school anytime the clouds thicken will be no more. A licensed Cocoa Buying Company, the Federated Commodities Limited (FEDCo) in partnership with Walter Matter and Valrhona SA, have constructed a six-unit classroom block with toilet facilities for the school. Until the construction, authorities of the Atwereboanda M/A Junior High School were forced to close school anytime there is the slightest indication that it will rain. The school was housed in a three-unit mud structure with perforated roofing sheets that leak badly whenever it rains. Authorities of the school complained that their situation was worse during the rainy season. “Teaching and learning is affected badly when we are in the rainy season. “Sometimes we are only able to do only one day out of the five working days. This was affecting teaching and learning significantly,” a frustrated teacher stated. Hinges of doors to the classrooms have been removed, making them hang loosely. The structure has also developed life-threatening cracks all over. Due to the absence of security in the school, it has become a resting place for roaming livestock and also a den for criminals. Doors to the structure also hung loosely while cracks were all over it. 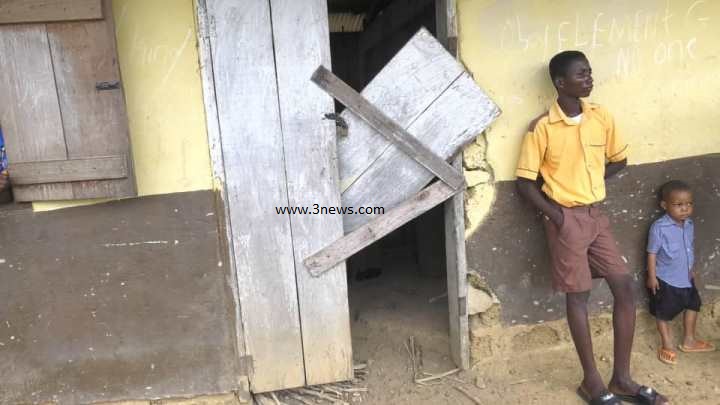 The mainstay of the Atwereboanda community is cocoa farming. The community produces hundreds of bags of cocoa each season. The Federated Commodities Limited (FEDco) has been buying cocoa beans from the community for a while. The company together with its partners decided to construct the new classroom block with toilet facilities after being touched by the plight of the school. At a presentation ceremony at Atwereboanda, Managing Director of FEDCo Hajia Maria Adamu-Zibo explained her outfit understands the importance of education therefore it was not a difficult to put up the school. Of particular concern to her is that a functioning school will prevent the children from going to farm with their parents. “For this reason putting up schools in our operational areas with support from Valrhona has always been fulfilling. She added: “To date, our partnership with Valrhona has led to the construction of a six-unit primary school block as well as Community Center with ICT and library in Wassa Nkran, a three-unit KG block with library and ICT facility in Pieso.” They also donated books to eight basic schools across various communities in the Prestea Huni Valley Municipality. “It is also worth noting that together with our partners we have been able to build over 90 boreholes in six districts,” she stated. Leader of Valrhona Clementine Alzial said one of the best footprints they can leave in Atwereboanda is by creating a congenial avenue for children of their partner cocoa farmers to be able to go to school. “This school building, we are hopeful will eliminate instances of missing school because of the rains.” The Prestea Huni-Valley Municipal Director of Education, Mary Vida Kwofie, applauded FEDco and its partners for the project, saying: “Security and safety of our children is now assured since there is a new building”. She appealed for a teacher’s quarters and urged the chief and community leaders to ensure regular maintenance. Prestea Huni-Valley Municipal Chief Executive Mozart Owu encouraged parents and guardians to ensure children of school going age are in school instead of using them as farm hands on their cocoa farm. As a show of appreciation to the cocoa farmers at Atwereboanda for keeping faith with FEDco a premium of GH¢25 – which amounted to GH¢520,000 – was paid to 1,100 cocoa farmers. The premium, which is for 1,300 metric tonnes of cocoa lifted under the traceable programme for the 2018/2019 cocoa season, is the highest paid in the Prestea Huni-Valley Municipality, in the Western Region and the country as a whole.