Mr. Percy Asare Ansah[/caption] The Chief Executive Officer of the Premier Health Insurance is calling for a concerted and holistic effort aimed at fighting the canker of breast cancer in the country. Percy Asare Ansah described as alarming the increasing cases of breast cancer in the country with its potentially deadly consequences. Speaking on the Premier Pink October campaign to create awareness about breast cancer in the country, Mr Ansah said fear factor is a major problem in the fight against breast cancer and called on all stakeholders in the health architecture in the country to come together to fight the canker. Background According to GLOBOCAN, an International Agency for Research on cancer, an estimated 4,600 new cases of breast cancer will be diagnosed in Ghana this year with more than 1,800 women likely to lose their lives. Even though the survival rate in other countries is improving, Ghana’s surviving rate is depressingly low. According to the former Deputy Director of the Ghana Health Service, Dr Gloria Quansah Asare, the late stage presentation of breast cancer cases was common and estimated to be about 67 per cent or higher in Ghana. “The overall five years survival in better resourced areas is above 80 per cent, while ours is estimated to be about 40 per cent,” she added. At its Annual General Meeting in Accra, under the theme: “Breast diseases—closing the gap between patients, health workers and scientists” the Breast Society of Ghana expressed concern about the needless and avoidable fatalities of breast cancer. “Families are losing mothers, wives, sisters and daughters. We are all losing relations and friends and the society and nation at large is worse off for this,” President of the Breast Society, Dr Florence Dedey, summed up the frustration of members of the Breast Society. 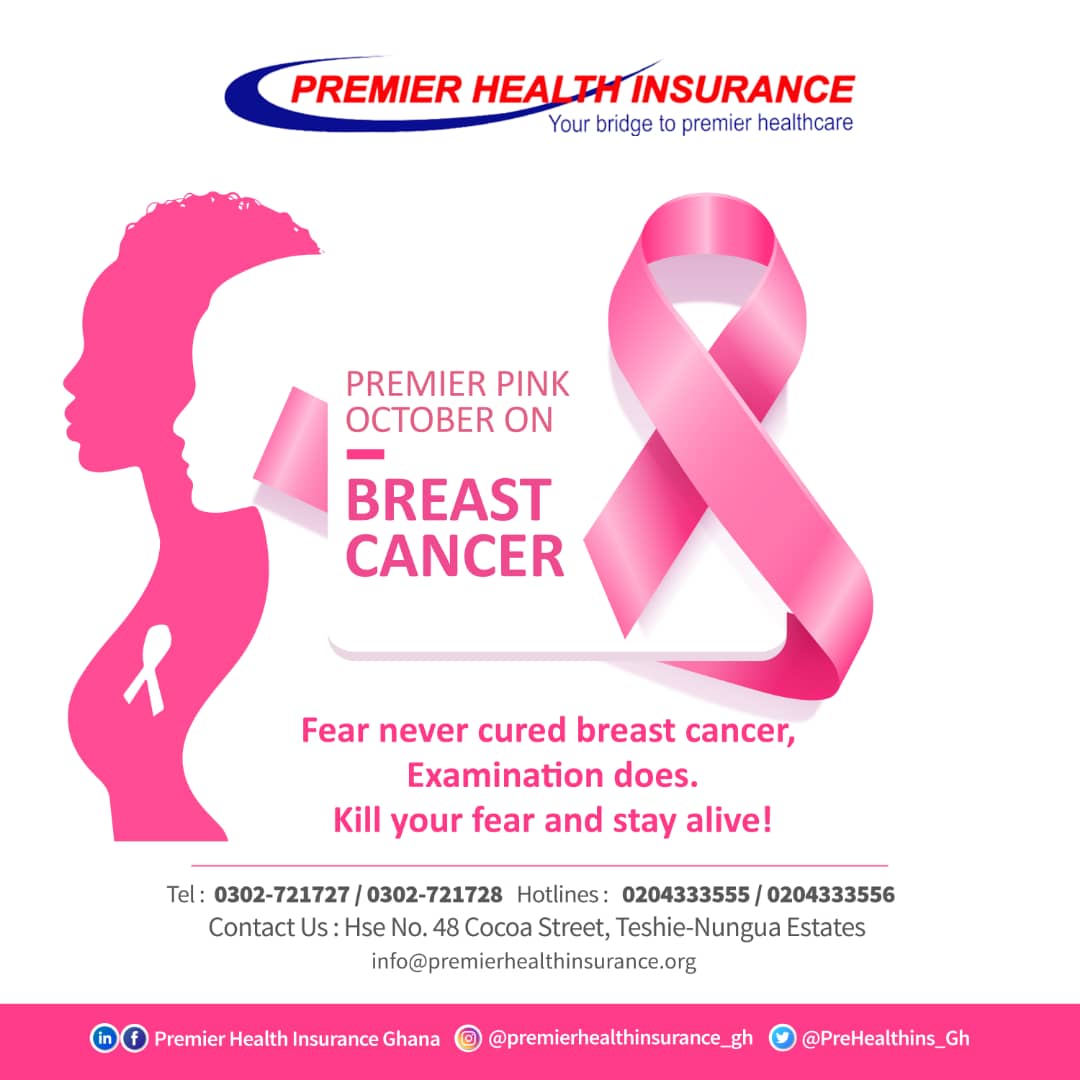 Premier Pink October Chief Executive Officer of Premier Health Insurance Mr. Percy Ansah said he is worried at the breast cancer fatality and his outfit will do what it can in its power to deal with the matter. “For a company that is interested in providing healthcare services for its clients across the country, any disease or ailment that has the potential of taking the lives of over 1,800 of our clients and potential clients, is alarming and a source of great worry for us. “The threat of breast cancer is real and alarming across the globe and in Ghana and must be dealt with head-on. He said the role of Private Health Insurance towards the fight against breast cancer cannot be overemphasized and called on all stakeholders to pool resources together to fight the canker. “Here at Premier we have noticed that fear is a major factor contributing to the late stage presentation and increased fatalities. We are therefore rolling out messages and campaigns on all our social media platforms about the fear factor in the breast cancer fight and how to deal with it. “We believe that women must know how to examine their breasts, get to know their status and that can only be done if the fear factor is taken away,” he added. He said Premier Health Insurance has over the years taken care of all costs related to the treatment of breast cancer and will do even more in fighting the canker.