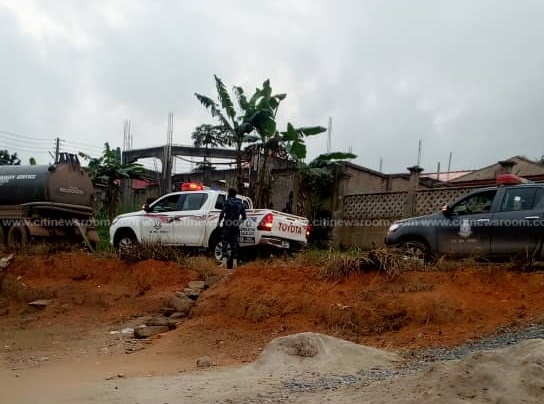 It is emerging that the Police team which conducted a special operation to retrieve human parts suspected to be that of the three kidnapped Takordi girls were ill-prepared for the homicide investigation.

Personnel from the Police CID headquarters in Accra joined their counterparts in Takoradi Friday night to an uncompleted building at Kansaworodo in Takoradi where the key suspect in the kidnapping case lived before his arrest last year.

The operation by the team led to the discovery and retrieval of “some human remains” from a septic tank behind the building. Police say the remains will be taken for a forensic examination to determine their identities.

Residents who live around the ‘crime scene’ and witnessed the Friday operation have been narrating to 3news.com how the detectives, believed to be from the homicide unit of the Police CID, were allegedly not properly prepared.

According to them, the police arrived at the crime scene for the retrieval operation without even the basic requisite tools and equipment for homicide investigation.

A resident who lives opposite the uncompleted building from where the body parts were retrieved revealed to 3news.com that the detectives went round begging for equipment to clear the scene of weeds.

The lady who spoke on condition of anonymity said the detectives came to her house to request for cutlasses, shovel and pick axe which they used in clearing the septic tank area, which was covered in weeds.

READ ALSO:  Another lady kidnapped in Takoradi; kidnappers threaten to kill her if...

The witness said she could not find a wire mesh for the homicide team but they eventually got some from another person. They however could not use that to retrieve the human remains, the eyewitness said.

In view of the challenge, she said, the team was forced to improvise by attaching a nail to a bamboo to serve as a hook, which they used to remove the human remains from the septic tank.

The human remains, the eyewitness said, were then put “in two boxes” and placed in one of seven police pick-up vehicles and sped off amidst blowing of sirens around 7:00pm.

Following the retrieval of the human remains, the eyewitness claimed she saw the police beat the suspect, Samuel Wills, who was brought to the scene, mercilessly before he was bundled into one of the vehicle.

How did the exercise start?

According to 3news.com sources, some plain clothed detectives started arriving at the uncompleted building (suspected crime scene) at about 11:00am Friday.

They cordoned off the area amidst tight security, the sources said.

At about 3:00pm, another batch were said to have also arrived in vehicles amidst blowing of sirens.

Then between 5:00pm and 6:00pm they began scouting for equipment to clear the area for the retrieval exercise, our sources who witnessed the incident claimed.

Meanwhile, a forensic examination is scheduled to be conducted on the human remains, the Police have announced.

Ahead of the test, many residents who witnessed the Friday night operation at Kansaworodo believe the remains are that of the three kidnapped girls.

“The discovered human remains would be sent to the forensic science laboratory of the Ghana Police Service for analysis and further investigations” the Police CID said in a statement following speculations the remains are that of the three kidnapped girls.