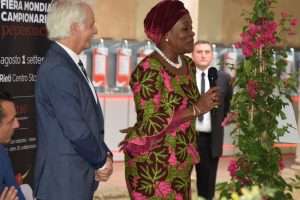 Ghana has marketed pepper as one of its non-traditional export products at this year’s world chili pepper trade show in Reiti, Italy.

Mrs Eudora Quartey-Koranteng, Ghana’s Ambassador to Italy, opened the fair
in Reiti, Italy, on Wednesday, August 28, 2019. The fair will end on Sunday, September 1, 2019.

The West African nation showcased its pepper industry as one of the sectors with immense investment opportunities.

Reiti is a city located in Lazio Region, central Italy. The city is the main producer of chili pepper in Europe.

The trade show is organized by the Association of “Reiti Cuore Piccante” (Reiti Hot Heart) in collaboration with Italy’s National Pepper Academy, the Ministry of Food and Agriculture, Forestry and Tourism, Region of Lazio, Province of Reiti, the Municipality of Reiti, the Chamber of Commerce of Reiti, National Confederation of Commerce in North Lazio and the Varrone Foundation.

Since its inception in 2011, the Reiti World Chili Pepper Trade Show has turned out to be a major success story, pulling food lovers, gourmet/bon vivant and curious observers from all over the world.

About 150,000 individuals attend the show annually.

This year, there are over 150 food stands.Guests are being treated to hot chili pepper meals.

The exhibition has over 600 varieties of hot chili pepper from all over the world being displayed.

The trade fair is featuring conferences on topics such as industrial development, pepper trade in Italy, sports and health.

It is also featuring a pepper themed cooking show being hosted by professional chefs with the help of interns.

Other countries participating in this year’s fair include Vietnam, Indonesia Ecuador.

Ghana is being represented at the fair by its Embassy in Rome with different fresh peppers on display and pepper sauces for sampling.

Spain and Italy ‘give US hope’ cases will level off