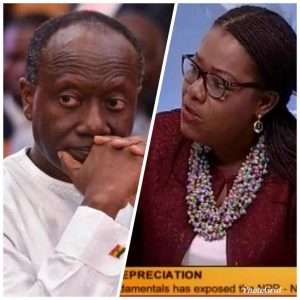 The Finance Minister had told Parliament Thursday that the President, Nana Addo Dankwa Akufo-Addo ordered the formation of a bi-partisan committee to probe the continuous depreciation of the value of the cedi.

“The president has directed that I investigate the structural causes for the depreciation of the cedi and to propose measures to address the situation, the government and I will put a bi-partisan committee together to proceed immediately”, Mr. Ofori-Atta told Parliament Thursday.

But commenting on the issue on TV3 New Day Friday, Ms Oye Lithur observed the call by the President for the formation of a committee to probe the causes of the falling cedi smacks of incompetence on the part of the government’s Economic Management Team(EMT) and the government at large.

According to her, if as Finance Minister who is a member of the Economic Manage Team (EMT) does not know the causes of the falling cedi, then he ought to resign.

“If the NPP is saying that with their economic management team that the vice president, Dr. Bawumia touted about, Osei Akoto, Senior Minister, Governor of Bank of Ghana, if they do not know that problem that we have and that they need a bi-partisan committee to sit to diagnose the problem of the economy of Ghana two and a half years into their tenure when they have only four years … then honorable Ken Ofori Atta has no business being a Minister of Finance”, she said.

She added that if the New Patriotic Party under the leadership of Akufo-Addo cannot identify the problem in the economy, then it clearly implies they are not capable of managing the affairs of the country.

In her “simplistic” analysis, Ghana depends heavily on imports, a situation she explains puts a strain on the cedi causing it to depreciate.

She said she expects the professionals who form the economic management team to know better and do the needful rather calling for a bi-partisan committee.