Over twenty customers of the defunct GN Bank, have denied being paid their locked-up funds.

The customers called into the New Day programme on TV3 Thursday August 27 during the phone-in segment to reveal their concerns after the Governor of the Bank of Ghana (BoG), Dr Ernest Addison had told President Nana Addo Dankwa Akufo-Addo on Tuesday August 25 that all the customers of the collapsed local banks have been paid their locked-up funds.

The phone-in segment was to fact-check the claim by the governor of the central bank.

Some of the customers said they had been waiting on authorities to ensure that their funds are paid but to no avail.

“It is only God is who is taking care of me now because I don’t have money,” one of the customers told Etornam Say on the show.

Dr Addison, has revealed that all the customers of the collapsed nine local banks during the clean up exercise in the banking sector, have been fully paid their locked-up funds.

He said this when President Nana Addo Dankwa Akufo-Addo paid a working visit to the central bank on Tuesday August 25.

He said “We had the [banking sector] reform in two phases. The first phase had to do with the banking system where we revoked the licenses of the banks. Depositors got their monies.”

He added “Your Excellency, the Bank of Ghana, over the last three and half years, has played a critical role in the government’s transformation agenda. Through reforms that were effectively coordinated with the fiscal authorities, macroeconomic stability was re-established following the significant imbalances at the end of 2016.

“Prior to the onset of the COVID-19 pandemic, the Ghanaian economic was once again classified among the fastest growing economies in the world, under your leadership. Growth averaged [7] percent; inflation was reduced significantly and maintained in single digits and well within the Banks target range, and exchange rate stability was well anchored. In fact, the economy had all the ingredients for broad-based inclusive growth.

“And these efforts were rewarded with Ghana’s first ratings upgrade, in 10 years, by Fitch global ratings agency from B- to a B with a positive outlook. Your Excellency, your support to the Bank during the reforms in the banking sector cannot be over emphasized.

“Your clear leadership and understanding of the role of the financial sector in the government’s transformation agenda, gave the leadership of the Bank the confidence and courage to embark on the comprehensive banking sector reforms over the last three years, which saw an increase in the minimum capital requirements, clean-up of the financial sector by the revocation of licenses of weak and insolvent institutions, and a revamp of the regulatory framework to stabilise and strengthen the sector.”

Missing excavators probe: Covid-19 to blame for delay – Nana B 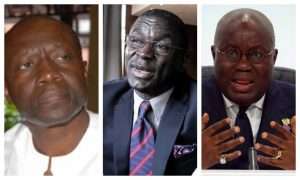 Missing excavators probe: Covid-19 to blame for delay - Nana B

2020 GMB Finals: Adina, KiDi, Praye and others on the bill

2020 GMB Finals: Adina, KiDi, Praye and others on the bill