Dr. Yaw Adu-Ampomah[/caption] Evidence has emerged that state prosecution witness, Dr. Yaw Adu-Ampomah tried to get certificate on Lithovit fertilizer renewed, when the product was a subject of his own investigation. The witness was the chairman of government’s transition team on cocoa when the previous administration handed over power in January 2017. Dr. Adu-Ampomah who is a former deputy chief executive of COCOBOD in charge of agronomy and quality control had in January 2017 recommended to government, in his report, to investigate the alleged anomaly in the testing as well as subsequent annual renewal of certificate of Lithovit fertilizer. Dr. Adu-Ampomah has been testifying against the former CEO of COCOBOD Dr. Stephen Opuni and a businessman, Seidu Agongo, who are standing trial for allegedly engaging in various illegalities that caused financial loss of GHC271.3 million to the state and led to the distribution of substandard fertiliser to cocoa farmers. Interestingly, the witness who called for the investigation into Lithovit because it was substandard rather went ahead to request the renewal of Agricult Ghana Limited certificate on Lithovit fertilizer barely two months later. The subject of his letter dated March 9, 2017 was “Renewal of Certificate for 2017 – Agricult GH Ltd” and was addressed to the Executive Director of Cocoa Research Institute of Ghana (CRIG), Dr. Franklin Manu Amoah who is the first prosecution witness. “We forward to you the attached request from Agricult Gh. Ltd for the renewal of the registration certificate of Lithovit fertilizer. Copies of the previous year’s certificate attached. “kindly undertake the necessary verification on the product and renew the certificate for the year 2017,” Dr. Adu-Ampomah’s letter to CRIG read in part. The letter was received by CRIG on March 14, 2017 and was minuted on a day after (March 15) by the Executive Director of CRIG to the Chairman of Committee on Testing Chemicals and Machinery (CTCM). The Chairman of CTCM was also asked to “kindly ensure due diligence in the re-evaluation of the product and submit report for forwarding to COCOBOD.” The letter was again forwarded on March 16, to the Head of Soil Science at CRIG. When the letter came up in court during cross examination on Thursday, June 20, Dr. Adu-Ampomah initially appeared evasive but had to open up later confessing to the act upon barrage of questions threw at him by Samuel Cudjoe who is the counsel for Dr. Stephen Opuni. He however said, his letter to CRIG to renew certificate for Lithovit fertilizer was to “gather more information about the anomalies which was seen during the preliminary investigation”. [caption id="attachment_127430" align="aligncenter" width="756"] 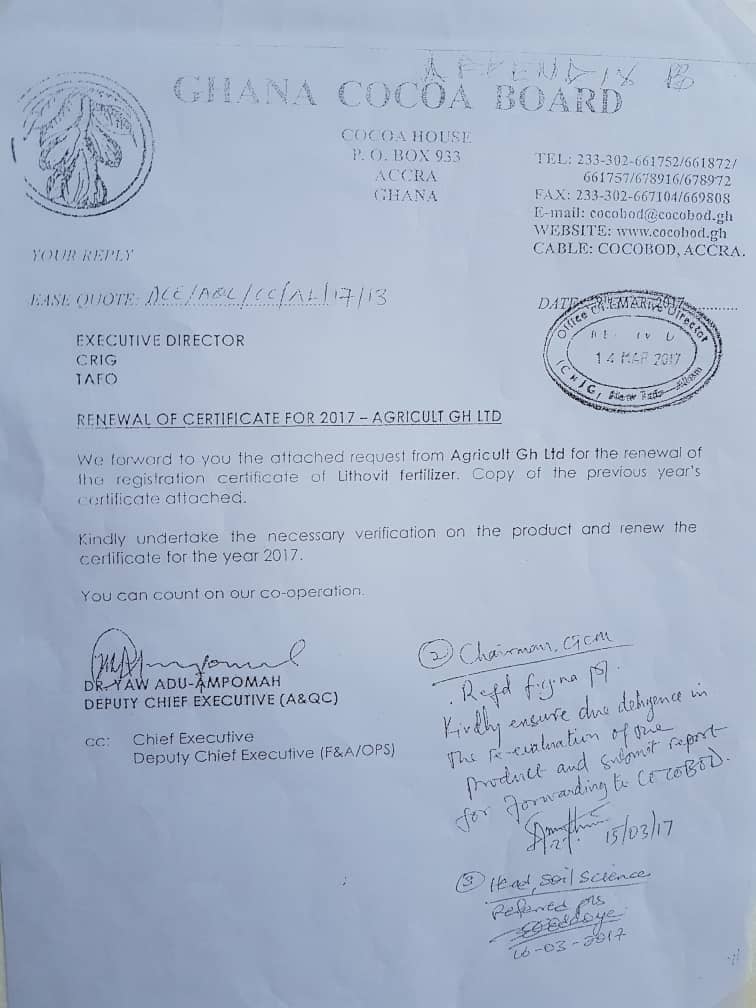