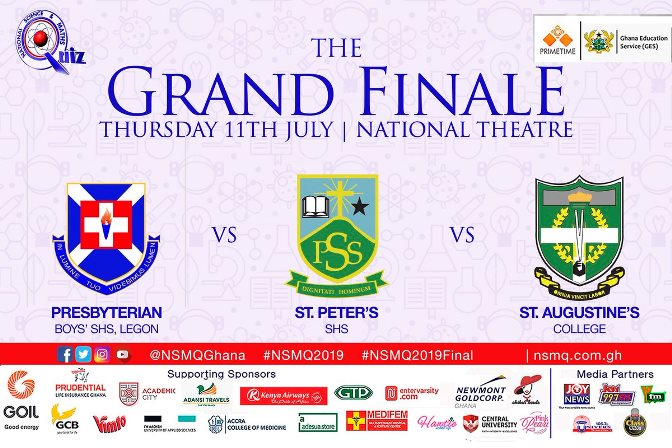 Champions St Peter’s Senior High School from the Eastern Region will have to defend their National Science and Maths Quiz title today, Thursday, July 11, at the National Theatre.

But they have got Presbyterian Boys’ SHS and St Augustine’s College to beat to achieve the feat.

It will be the final of the science and mathematics quiz competition that holds a huge chunk of the Ghanaian population spellbound.

St Peter’s are in the final again just a year after beating West Africa SHS, who failed to go past the one-eighth stage this year, and Adisadel College, who were knocked out in the semi-final by Presec-Legon.

With 48 points in the semi-final, Persco beat Tepa SHS and Wesley Girls’ High School to book a second successive appearance in the final.

The Nkwatia-based boys’ school will be chasing a fourth title to equal Prempeh College’s, the second-ranked side in the all-time rankings.

The first, Presbyterian Boys’ SHS, with five titles, are chasing a sixth, which appears to be a Holy Grail.

They last won the title a decade ago but performances this year makes the Legon-based side the favourites to win the title this year.

Already, the ‘Let’s Talk About Six’ social media buzz is catching on among both present and past students.

They beat perennial finalists Adisadel College and two-time champions Opoku Ware School in the semi-final to book a place in the final.

But the school with the highest score at the penultimate round this year, St Augustine’s College, will seek to add one more to their only crown annexed in 2007.

READ ALSO:  [Video] Mission gets results for Wa School for the Blind

That was also the only final they have contested in.

The final at the National Theatre promises to be exciting but at the same time nerve-racking.

The winning school receives the new bronze trophy, a cash prize, scholarships as well as souvinirs from sponsors.

GES apologizes to Akufo-Addo on behalf of students who insulted him in viral video; probes the matter

Encourage students to be their own masters – Dr. Ben Asante

Reason for your strike is baseless: Parents tell teacher unions

Allocation of resources to education in Ghana has dropped – Kofi Asare

‘Gold for crude oil’ move still being discussed, PMMC to...

Cameroon fight back to draw with Serbia