NSMQ 2019: OWASS beat KASS with one point to qualify 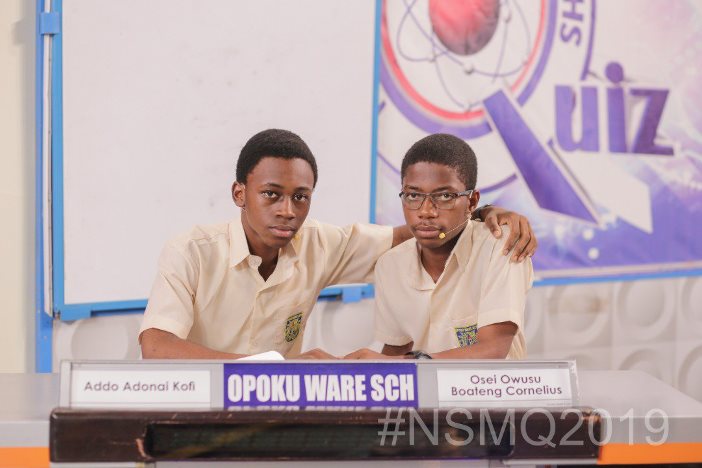 The two-time champions made their intentions clear from Round One as they hopped to the lead.

Closely chasing them their heels was KASS, who fought hard to overtake the former champions.

They were just one point short with the Problem of the Day and that may be the point that they never caught up with the leaders as Opoku Ware School scored full marks, just the second in this year’s contest.

KASS gave OWASS their biggest scare as they answered all their True/False questions correctly, pushing the score at the end of Round Four to a photo-finish.

Though the two schools had left OKESS in their trails by answering one riddle each correctly in the final round, it was OWASS that made sure they would not repeat last year’s mistake after falling to eventual giant-killers Sonrise SHS.

They picked the final riddle and won the day.

At the end of the contest, the last on Tuesday, June 25, OWASS amassed 52 points against 51 points for KASS and 37 for OKESS.

They will face University Practice SHS and St Ignatius of Loyola in the quarter-final.

UniPra brushed aside Asamankese SHS and Bolgatanga Girls’ SHS, though not with the numerous of points. With 37 points, they scraped through over Asamankese SHS’s 33 points and Bolga Girls’ 19 points.

The lowest-scoring contest on the day saw St Ignatius of Loyola overturning Kumasi SHTS’s lead the nail-biting final round.

It was in that round that they answered three riddles correctly to win with 26 points, leaving Kumasi SHTS on 22 points and Berekum SHS on 15 points.