According to him, these hospitals lack hot water facilities in the delivery of healthcare services to patients.

Against this background, Dr. Anyars has promised to provide the facilities to the two hospitals.

The hospitals, which are situated in a constituency he wants to serve as Member in Parliament, serve thousands.

This came to light after Dr Anyars, popularly known as ‘Barhama’, led a thorough cleanup exercise and donated to the Tamale Central Hospital.

“From my childhood days till now, I see caretakers of hospitalized patients commute every morning to these hospitals carrying flasks filled with hot water,” he observed.

“I want to save them the stress by providing hot water facilities in the hospitals as soon as possible.”

He, however, thanked the Barhama Ladies for their hard work and dedication towards his campaign, urging them to continue with the good work in their activities and spread his campaign messages in order to come out victorious in this year’s elections.

Speaking to the media, Hajia Mutiatu said the group took the initiative to demonstrate to the public the need for a clean environment and to drum home their parliamentary candidate’s dream of making Tamale Central the cleanest constituency in Tamale.

She, however, stated that as a group of young ladies, their understanding of the vulnerability and plight of women during pregnancy and labour is the reason they chose to donate to the maternity wards of the facility.

Pregnant women and mothers of newborn babies who were beneficiaries of the items expressed joy and appreciation for the gesture and thanked the Barhama Ladies.

They also prayed for victory for Barhama to become the next Member of Parliament for the Tamale Central Constituency.

Barhama Ladies is a political loyalist group which was instituted in May, 2019, to campaign towards victory for Dr. Barhama Anyars, NPP’s Parliamentary Candidate for the Tamale Central constituency and the New Patriotic Party as a whole.

The group has an active membership of over 150 young ladies. They go by a slogan in Dagbani, “Bobgu N-nye Yaa”, literally meaning ‘Unity is strength’. 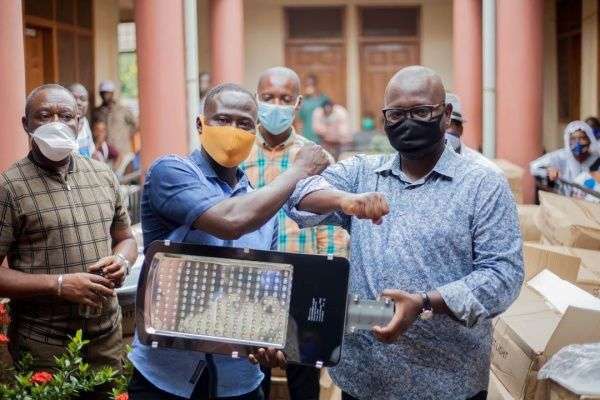 A Deputy Chief of Staff at the Office of the President, Mr. Francis Asenso-Boakye has made a presentation of seven...