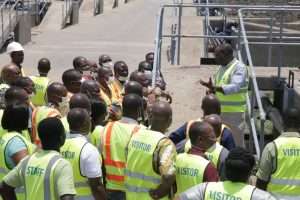 A New Patriotic Party Member of Parliament  in the Ashanti Region, Frimpong Yaw Addo, has proposed an increment in the Value Added Tax (VAT) to cater for the teething sanitation challenges confronting the country.

For him, adding a small percentage to the VAT to solve the sanitation challenges will not be a big deal for Ghanaians,

“I am proposing that if we add some small percentage on the VAT for sanitation, I don’t think any Ghanaian will kick against that idea,” he stated.

He underscored the need for “national consensus” on the proposal “so that everybody will come to agree with us that sanitation is the key and we re able to resolve it, everybody will be happy”.

Mr Addo who is the MP for Manso-Adubia made the proposal when he interacted with journalists when the Local Government & Rural Development, Works & Housing and Environment, Science and Technology and Innovation select committees of parliament toured the Integrated Recycling and Compost Plant Limited and the Sewage Systems Ghana Limited in Accra.d

The committees were at the facilities to ascertain how best the owners of the facility could help address the sanitation challenges with government’s support.

He argued his proposal could do ‘magic’ for the country if accepted.

Mr Addo made a case for Ghana to move away from landfill sites, noting a lot of things happen underground landfill sites and that “in 50 to 60 years’ time, all our lands will be taken by landfill sites”.

“The population is increasing 2.5% annually and we need to come out with ideas that can resolve our sanitation problems and these are some of the things that all of us must come together to push,” he underscored.

But some have viewed the MP’s proposal for an increment in VAT as something the government intends introducing inthe 2020 budget.

“It is a very nice idea but I bet you, it is something that the government is planning to introduce in the 2020 Budget. What he said is to test the waters to see the reaction of the public,”  a resident of Korle Gonno, Ernest Quartey, said.

For him “If the people accept it, the government will go ahead to introduce it. If they reject it, that will be the end”.

Thousands of members of The Church of Pentecost, Achimota Area, have embarked on a massive clean-up exercise as a move...

Former President John Mahama has downplayed the relevance of the Sanitation Ministry created by the Akufo-Addo-led government, insisting he will...