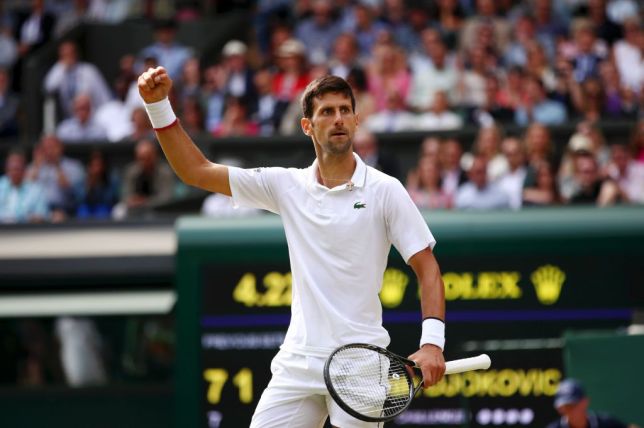 Novak Djokovic saved two championship points to down Roger Federer and win his fifth Wimbledon title in a pulsating five-set thriller – the longest final in the tournament’s history and the first ever deciding-set tiebreak at 12-12 in singles. The world No. 1 looked below par for large portions of a tense final but – as he’s done so often in his career – stepped up when it really mattered in a 7-6 (7-5) 1-6 7-6 (7-4) 4-6 13-12 (7-3) win after four hours and 57 minutes to deny Federer a joint-record ninth crown in the most dramatic possible fashion. A 12-12 fifth set tiebreak was introduced this year after the six-and-a-half hour semi-final match between Kevin Anderson and John Isner in 2018 disrupted finals weekend, but it wasn’t until this year’s final that we first saw it come into play at The Championships. The match replaced Rafael Nadal’s famous win over Federer in the 2008 final as the longest final in Wimbledon’s history. The last set lasted 122 minutes. A decade on from his 16-14 five-set win over Andy Roddick, Federer was not only chasing Martina Navratilova’s nine-title haul. The 37-year-old could have become the oldest player in the Open Era to win a men’s singles Grand Slam. But Djokovic, who has now won four of the past five Grand Slams had other ideas, as he claimed his 16th major title and pocketed £2,350,000. It may prove rather significant in the battle to end their respective careers as the greatest of all time (GOAT). Djokovic, 32, moved to within four titles of Federer’s Slam haul, with plenty of years left in the tank.

‘I just needed to stop’ – Serena Williams opens up about retiring