The Korle-Bu Teaching Hospital (KBTH) in Accra is rolling out a medical outreach programme to deploy medical doctors to some health facilities to help address the “no bed” syndrome that has hit hospitals in the country.

As part of that move, the hospital is arranging to procure standby ambulances and shuttles that will transport patients to the health facilities for prompt attention.

The Chairman of the reconstituted board of the KBTH, Dr Bernard Okoe Boye, who announced this at the inauguration of the board in Accra yesterday, July 13, 2018, said arrangements had also been made to deploy trained medical protocol officers to facilitate healthcare delivery in the new paradigm.

A 70-year-old man, Prince Anthony Opoku Acheampong, reportedly died in his car at the LEKMA Hospital in Accra, after seven hospitals turned him away over claims that there were no beds.

Acheampong was the Chief Executive Officer (CEO) of Printhony Printing Press in Adabraka, a suburb of Accra.

His death sparked a public outcry about emergency response in the country’s healthcare system.

Following that unfortunate incident, the Ministry of Health directed hospitals not to turn away patients on the grounds that there were no beds.

The KBTH, which is the country’s premier medical referral centre, has been hard hit with this challenges with beds such that some patients who went there to access health care were asked to buy chairs to sit on.

At the inauguration of the 11-member board for the hospital, the Minister of Health, Mr Kwaku Agyeman-Manu, urged the members of the board to lead a process to address the ‘’no bed’’ syndrome the next six months.

“In the next six months, innovative strategies will have to be put in place for the KBTH to look different so the members of this board must shelve individual egos and get their act together and collaborate with other stakeholders to get the needed results,” he said. 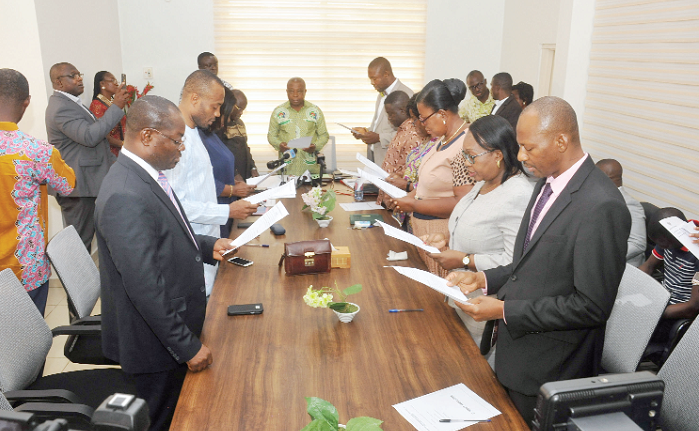 He challenged the management of the hospital to rise up to the challenge at hand, noting that there was no point compromising the quality of healthcare services because of the lack of resources.

Mr Agyeman-Manu charged the hospital to be ingenious and innovative enough to be able to raise more internally generated funds (IGFs) to support their operations.

He announced that the 70-bed capacity Emergency Unit that had been fallow for about two years because of certain structural defects and malfunctioning of equipment, would be inaugurated on Friday, July 21 to ease the congestion at the hospital.

He added that efforts were being made to deploy a cashless regime at the KBTH to improve efficiency in service delivery and the prudent management of resources.

The rest, who are all nominees of the President, are Ms Rhada Maria Odua Hackman, Mr Jerry Ahmed Shaib and Dr Patrina Tekyi-Ankrah.

The 11-member board will be complete when a substantive CEO is appointed for the KBTH.