The Nkwanta Senior High School in the Volta Region has been closed down temporarily following massive destruction of school properties by some rampaging students of the school last Monday night. The students went on the rampage after some teachers had seized their mobile phones during a roll call in some of the dormitories last Monday. Among the properties vandalised are three staff bungalows, 26 motorbikes belonging to teachers, five vehicles, including a pick-up, two school buses, a tipper truck and a car belonging to the Nkwanta Divisional Police Commander. The rampaging students also destroyed the school’s water systems and ECG meters, leading to a power outage and the cessation of water supply to the school. In addition, whiteboards in the classrooms were destroyed by the students. Almost all the male students have deserted the school, while the female students have been confined to their dormitories. Eyewitness account

According to an eyewitness account, teachers resident on the school compound had to run for their lives to escape the stone and stick-wielding students who invaded their homes. It said a police patrol team that arrived on the compound to restore calm reportedly appeared helpless because the students hurled stones at them. It said it took the intervention of a military reinforcement team to stop the students from totally destroying everything in the school. “Although the police patrol team came to the school on time, they could not salvage the situation, as the rampaging students turned the heat on them, so that they could destroy more properties. When the military reinforcement team got to the campus, the harm had already been caused,” it added.
READ ALSO:  Courts don’t determine elected MPs – Haruna to Markins on Assin North-MP injunction
Crunch meeting At  a crunch meeting to assess the extent of damage and the security situation in the school in Nkwanta yesterday, the Nkwanta Municipal Security Council (MUSEC) decided to close down the school. The meeting, which lasted almost six hours, was attended by key members of MUSEC, including the Municipal Chief Executive (MCE), Mr John Tasun; the Nkwanta Divisional Police Commander, ASP William Ayesu Asare, as well as the Municipal Director of Education, Mr Stephen Tsuaitorfe. MUSEC’s decision Confirming the decision of MUSEC to the Daily Graphic, Mr Tsuaitorfe said the extent of destruction caused to school facilities made it impossible to continue with academic work. “There is no light in the school because the meters have been destroyed by the students. The main pipeline to the school has also been destroyed, so as I speak to you now there is no water in the school. The students also destroyed the marker boards in the classrooms. “MUSEC decided to let the rest of the students go home, so that a stakeholders’ meeting will be held tomorrow to look at how we can fix the damage and then decide on when the students will return to school,” he said. Mr Tsuaitorfe said they directed security personnel to enforce the directive by MUSEC that  all students leave the school compound before 4 p.m. yesterday. He also said final-year students had been directed to the Community Day SHS in the town to register for their West Africa Senior School Examination (WASSCE). Mr Tsuaitorfe confirmed that some students who were involved in the acts of vandalism had been arrested to assist the police in investigations. However, he declined to give details of the arrests.
READ ALSO:  World Cup: Wilfred Osei Palmer ordered to apologize over Black Stars bribery claim 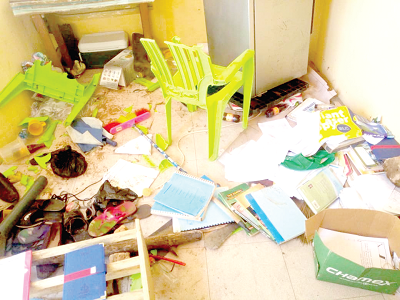 Headmaster The Headmaster of the school, Mr Paul B. Nyarko, told the Daily Graphic that the extent of damage was serious and had dire consequences on the school community. He, however, said the tension that was created in the school had been brought under control by the security agencies. “As we speak now the situation is under control because the security agencies have taken charge of the safety of people here. The MUSEC meeting has taken place and definite decisions have been taken, but it is not within my power to communicate those decisions to you,” he said. As of the time of going to press, reports indicated that the police had barricaded the school premises from the town folk who thronged the area to catch a glimpse of the damage. The main gates to the school have been locked, making it impossible for anyone to go to the compound. Source: Daily Graphic | Ghana]]>

The Ghana Garden and Flower show December edition is here