The suspect was apprehended by cops after the blast[/caption]

A man is being held after an attempted terror attack at New York City’s main bus terminal, officials say.

“Terrorists won’t win,” Mayor Bill de Blasio said after a blast at the Port Authority terminal in Manhattan during the morning rush hour on Monday. The suspect, named as Akayed Ullah, 27, was wounded when a “low-tech explosive device” strapped to his body blew up in an underpass, officials say. They say three other people suffered minor injuries. A photo circulating on social media shows a man, said to be the suspect, lying on the ground with his clothes ripped and lacerations on his upper body. [caption id="" align="alignnone" width="720"] 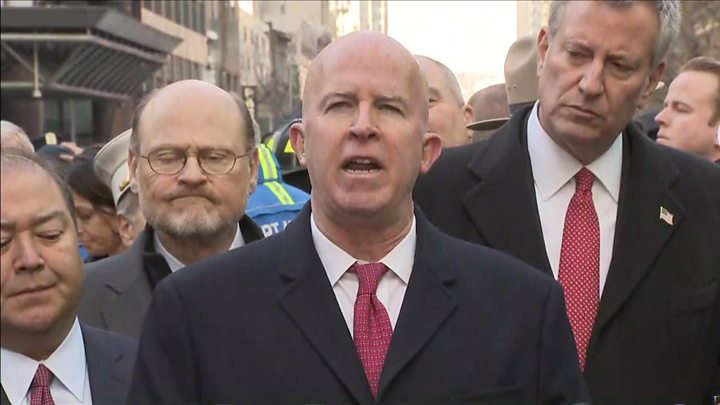 NYC police commissioner: ‘Suspect has burns and wounds to body’[/caption] Mayor De Blasio said he was believed to have acted alone. New York Governor Andrew Cuomo said: “This is New York. The reality is that we are a target by many who would like to make a statement against democracy, against freedom. “We have the Statue of Liberty in our harbour and that makes us an international target.” White House press secretary Sarah Sanders said President Donald Trump had been briefed on the incident. The Port Authority Bus Terminal is the biggest and busiest bus terminal in the world, serving more than 65 million people a year.