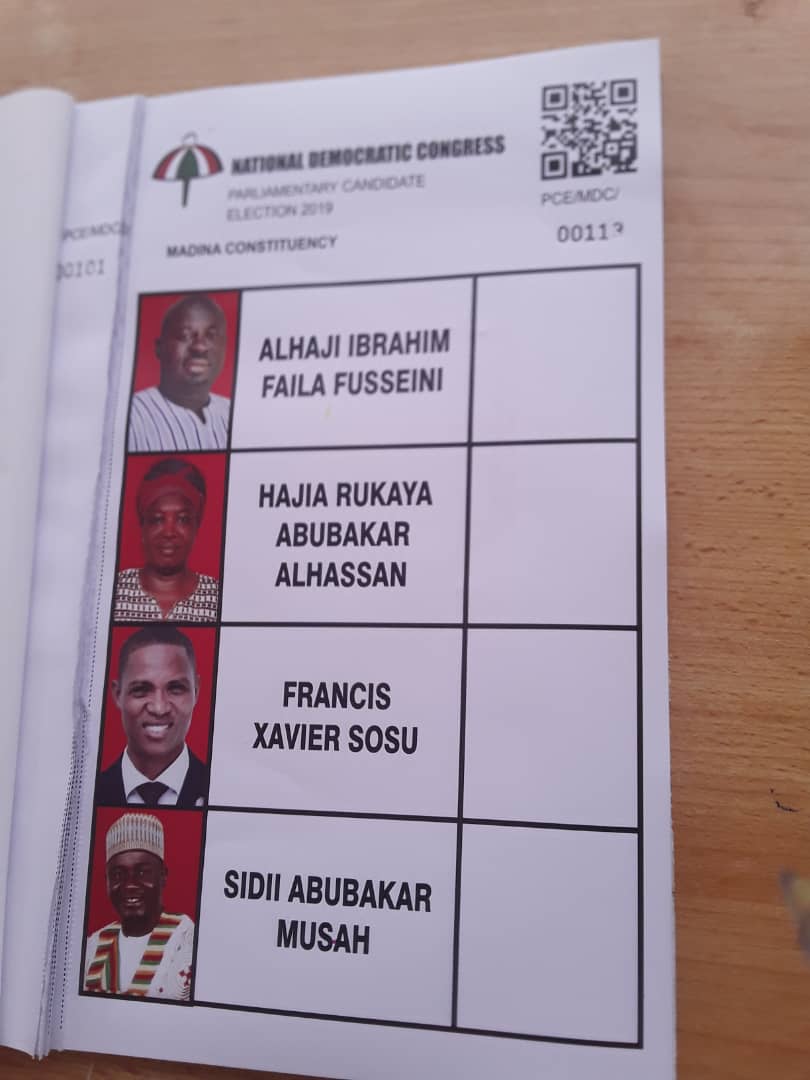 A National Democratic Congress parliamentary aspirant for Madina Constituency, Francis Xavier Sosu, has raised red flag over ballot papers being issued delegates in the area in the ongoing constituency primary. The legal practitioner questioned why the ballot papers were not signed and stamped at the start of the primary in his constituency Saturday. “Ballot papers were being issued without signatures,” he told our correspondent Wendy Laryea. According to him, stakeholders in the constituency primary had agreed that all ballot papers were going to be signed and stamped by the EC before being issued to delegates to thumbprint in the voting screen. But in this case, they were not being signed and that was where there were issues and we had raised those issues.” Again, he claimed delegates who presented NDC party cards were being allowed to vote in the constituency primary, something he said was in contravention to what was agreed among the stakeholders. “We realised that contrary to what we have agreed at our stakeholder meeting, the electoral officers wanted to accept party cards which was not only contrary to our stakeholder meetings agreement but also contrary to the directives given by the party,” he alleged. But the Constituency Secretary of the NDC, Abdul Razak Hussein, has rejected the claims of Mr Sosu indicating they were not legitimate in view of the guidelines on the NDC primary being conducted in 157 constituencies across the country. On the issue of ballots not being signed and stamped, he said the papers were being stamped as required, but indicated that nowhere is it stated in the guidelines that the ballots are to be signed before issued to delegates. “In the general election they don’t sign, they only stamp it. What we are doing today is just like the national, so no signature; it’s just stamp. So it is only the stamp that they endorse on it,” he clarified. He justified the acceptance of party cards as means of identification, stating that was in line with the decision of the National Executive Committee of the NDC, but explained delegates using the party’s card ought to bring along their branch register for confirmation of their identities. He said delegates are supposed to use their voter ID card but in the absence of that, they could provide any national identity card including NHIS card and driver’s licence. Meanwhile, Mr Sosu has told our correspondent that they have since resolved all the issues he raised and voting is going on “smoothly and peacefully”. Mr Sosu us up against three others – Alhaji Ibrahim Faila Fusseini, Hajia Rukaya Abubakar Alhassan, and Sidii Abubakar Musah. He urged the delegates and party officials to allow the process to be free and fair and also avoid fights, insults and insinuations. “Let’s all be calm until a winner is declared so we can all rally around that person and support him for the 2020,” he said

‘Come jail me’ – Bullgod alleges ‘Jubilee House’ threatened him over...

Nothing can go wrong if you have a woman on your...