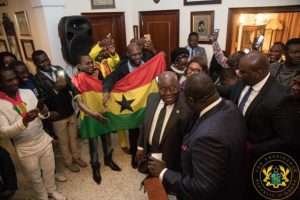 The Ministry of Foreign Affairs and Regional Integration has directed the Permanent Mission of Ghana to the UN and the Consulate General in New York to compile a list of Ghanaians stranded in the US who wish to be evacuated.

This is expected to be done by Tuesday, May 12.

The list will inform a government decision to be taken subsequently.

Ghana’s land, sea and air borders were shut down at the instruction of President Nana Addo Dankwa Akufo-Addo on Sunday, March 22.

Probe on demolition of Nigeria High C’ssion building fast-tracked; to be released today

This decision has been extended twice by an Executive Instrument (EI).

On May Day, President Akufo-Addo announced that the borders will not be opened at least till Sunday, May 31.

This came despite calls by some Ghanaians including rapper Sarkodie to have the border temporarily opened for them to return home.

But a statement issued by the Information Officer at the Permanent Mission of Ghana to the UN, Frederick Ameyaw, on Friday, May 8 said: “All affected Ghanaians in the tri-state area of New York, New Jersey and Connecticut are requested to register with the Mission by providing the following information:

“1. Name and Biodata of Passport 2. US Visa page and date of entry 3. State and City of residence  in the united States.”

Probe on demolition of Nigeria High C’ssion building fast-tracked; to be released today