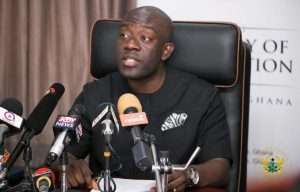 Information Minister, Kojo Oppong Nkrumah says the Minority’s press conference on the economy and the performance of the cedi should have been done earlier since government has already taken steps to salvage the situation.

Addressing the media on Wednesday, March 20, 2019, after the minority’s conference, Mr. Oppong Nkrumah said the minority provided no new information on the economy, and that the issues they stated are already known to Ghanaians.

“The substance of their presentation today essentially is that the cedi has depreciated and that investors are taking hits, and this is an already acknowledge point. Government has already been working to address the situation.

According to the Information Minister, there is improvement in the cedis performance against the dollar, and that there are plans to further stabilize the cedi in the coming days.

“So the cedi is gradually making a comeback and this minority attempts to take political jabs is a bit late in the day,” Mr. Oppong Nkrumah noted.

The minority led by Ranking member of the Finance Committee of Parliament, Cassiel Ato Forson held a press conference where  government was accused of mismanaging the economy.

They charged government to present a new budget to Parliament since they are not going by the one presented earlier.

According to the minority, the economy has been thrown in disarray together with projections surrounding it as contained in the 2019 budget presented to parliament.

The expressed worry over the depreciating cedi, stating that it has taken a toll on businesses in the country.

But reacting to the minority press conference, Mr. Oppong assured that government is working towards ensuring that the cedi is stable, and businesses flourish in the country.