Manchester United recorded their biggest Old Trafford win over Chelsea since 1965 to condemn Frank Lampard to a miserable start as a Premier League manager.

Marcus Rashford scored twice, either side of a close-range effort from Anthony Martial, who had been given the number nine shirt back following the sale of Romelu Lukaku to Inter Milan. Substitute Daniel James completed the scoring with a goal on his debut nine minutes from time. The final scoreline was harsh on the visitors, who were the better side before the break and hit the frame of the goal through Tammy Abraham and Emerson, but still suffered their worst ever opening-day defeat in 104 league seasons. The ecstatic home supporters did not care about that though, as the negativity of a difficult summer was swept away by their best result against Chelsea since they beat them by the same score in the 1994 FA Cup final. An £80m introduction United had to pay Leicester £80m – and make Harry Maguire the most expensive defender ever – to land manager Ole Gunnar Solskjaer’s number one summer transfer target. Maguire’s England team-mate Rashford may grab the plaudits with his brace but the Yorkshireman’s authoritative performance underlined why his new boss wanted him above getting the big name midfield or striking reinforcements so many United fans have demanded on social media. His calmness under pressure helped ensure that when the home side looked shaky in the first half they did not add to their concerns with self-inflicted mistakes. Maguire was happy to keep it simple in possession and push the ball on to Paul Pogba when he could, and had the awareness to spot team-mates in trouble, something former United boss Jose Mourinho rather churlishly said on TV might be frequently needed in the case of Luke Shaw. The game was still in the balance when Maguire stepped up to challenge Abraham on the edge of the United box. Maguire calmly took possession, leaving Abraham on the floor in the process, and strode away, setting in motion the attack that ended with Martial bundling home.
READ ALSO:  Uefa doubles prize money for women's Euros
Risky strategy Lampard went for an early morning run around Old Trafford to prepare for his Premier League debut as Chelsea manager. The Blues’ record goal-scorer has made some bold decisions already, despite being barely a month into his new job. He has picked seven home-grown players in his senior squad: the four in action against United – Abraham, Mason Mount, Andreas Christensen and Fikayo Tomori – the currently injured duo of Ruben Loftus-Cheek and Callum Hudson-Odoi, and promising defender Reece James. 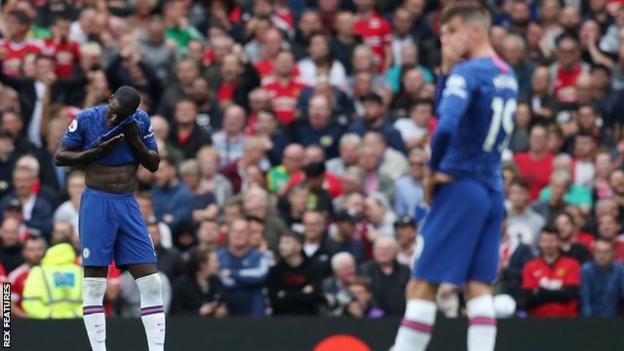 It is an unprecedented number for the Roman Abramovich era. But, while it is the philosophy of promoting youth from within that Chelsea’s fans have wanted, it comes with risk. For every powerful fourth-minute shot from Abraham that thunders off the inside of a post, there is the moment Mount had when, presented with a shooting opportunity from an angle on the right of the United box, the 20-year-old elected for a cut-back, which ran disappointingly through for new United defender Aaron Wan-Bissaka. Given that investment in youth, this summer’s transfer ban and the departure of Eden Hazard to Real Madrid, Lampard took a brave decision to sell David Luiz to Arsenal on deadline day. The Brazilian may not be the most reliable defender but his experience is valuable and Luiz’s replacement on Sunday, Kurt Zouma, struggled badly. He not only conceded the penalty but was also caught out of position and gave away possession, both expensive mistakes in an era when top teams routinely build from the back. Chelsea’s inability to stem the flow of goals in the second half will be a major concern for Lampard, whose name was still being sung heartily by the visiting fans at the end.
READ ALSO:  Black Stars squad for AFCON 2017 unveiled
A word for the referee United’s opening goal came from the penalty spot. Referee Anthony Taylor played an excellent advantage after Andreas Pereira had been fouled, allowing play to continue as Zouma brought Rashford down. Never a regular penalty taker for club or country, two of the three penalties Rashford has scored were in the World Cup last-16 shoot-out with Colombia last year and in the fourth-minute of injury-time to give United their memorable Champions League victory against Paris St-Germain in March. Man of the match – Marcus Rashford (Manchester United) 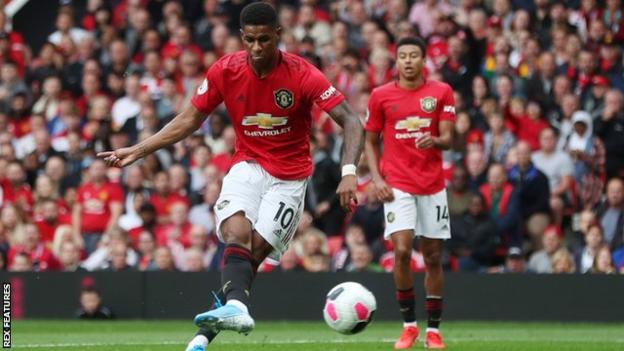 Day to forget for Lampard – the stats What’s next? United have a full week to prepare for the game at Wolves on 19 August (20:00 BST). Before then, Chelsea play two games – the Uefa Super Cup against Liverpool in Instanbul on Wednesday (20:00) and a home league game with Leicester next Sunday (16:30).
READ ALSO:  Leicester win first FA Cup after VAR disallow late Chelsea goal
Source:BBC]]>