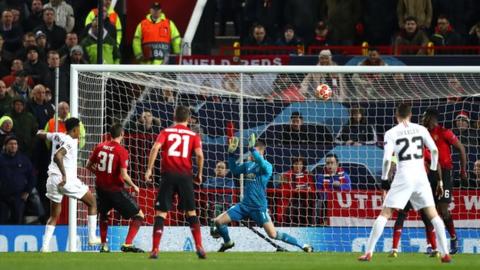 Manchester United must mount a miraculous recovery operation to keep their Champions League campaign alive after they were overpowered by Paris St. Germain at Old Trafford.

Second half goals from Presnel Kimpembe and Kylian Mbappe secured victory for the French champions, with Paul Pogba sent off for two yellow cards late on. United’s revival with 10 wins in 11 games under interim manager Ole Gunnar Solskjaer raised hopes that this was the night they could reclaim their place in Europe’s elite. Instead, they were outclassed by PSG to suffer their first European home defeat by a margin of more than one goal and will now need to produce something remarkable in Paris on 6 March to stand a chance of advancing to the Champions League quarter-finals. Solskjaer’s hopes were hampered by first-half injuries to Jesse Lingard and Anthony Martial but PSG made light of the absence of injured Brazilian superstar Neymar and striker Edinson Cavani. Former Manchester United misfit Angel Di Maria was their tormentor, his 53rd minute corner allowing Kimpembe, arguably fortunate to still be on the pitch, to escape the attentions of Nemanja Matic and sidefoot past David De Gea. And it was fitting that the brilliant Mbappe, whose searing pace was a threat all night, enhanced PSG’s position of superiority when he turn Di Maria’s inviting cross past the exposed De Gea on the hour. If United’s plight was not bad enough already, it was made worse when Pogba was sent off for a second yellow card in the final minute of normal time and will miss the second leg.
READ ALSO:  Africa to back Infantino bid for FIFA re-election
Source:BBC]]>