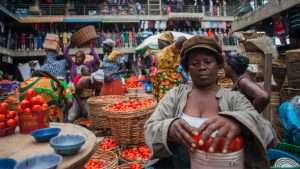 President of the Association of Informal Sector Workers and Makola Market Women, Julian Brown Afari, has raised concerns about the exclusion of the informal sector in the midyear budget review process.

The Minister of Finance, Ken Ofori Atta, is expected to read the midyear budget review in parliament on 29th July, 2019.

Speaking in an interview with Johnnie Hughes on TV3 New Day, Monday, Mrs Afari said, “Because they [assume] in the informal sector our educational background is low; so whenever things like [Budget review] are going to happen we should have a little education about it.”

She also wants government to dedicate persons well versed in budget-related issues to break things down to their members especially market women.

Madam Julian Afari suggested that a desk is allocated at the Ministry of Finance or Ministry of Trade and Industry to address their challenges and needs.

“I will always say that we need education. Those who are in charge of informal sector should visit us. They should let us know who is really responsible for the informal sector so that when we have an issue we will be able to channel that issue to where there will be a solution,” she said.

In another development, though informal sector is the largest employer of the Ghanaian workforce, it is the least in terms of government revenues in the form of direct taxation.

Head of Department of Finance at the University of Cape Coast, Prof. John Gatsi, admonished the government that if it wants to generate the needed revenue, it has to incentivize the informal sector through transparency and sensitization of the sector on the benefits of their taxes.

According to him it wasn’t enough for government to assume that everyone will pay tax because they are mandated by law.

“If we increase the benefit of taxes, it will incentivize the informal sector to pay their taxes,” he assessed.

Don’t take law into your hands – Akufo-Addo to traders

Cashless system: MDAs fees and charges to be automated