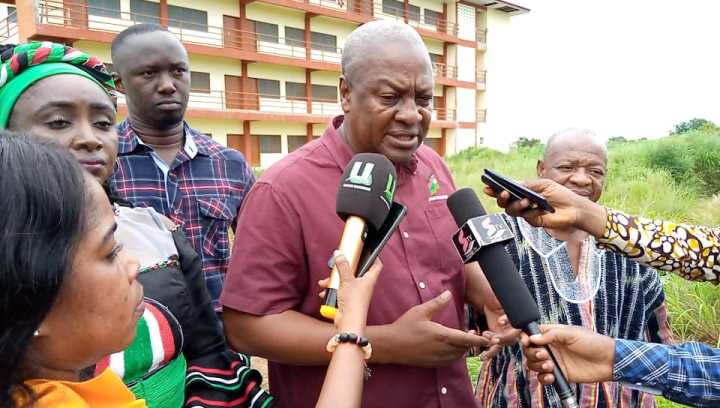 Former President John Dramani Mahama says the demand for legal services in Ghana has necessitated the need to expand legal education. He has therefore urged the Ghana Bar Association (GBA) to push for expansion of legal education in Ghana, but without compromising on quality. Mr Mahama said this when he and some top officials of the National Democratic Congress met with the GBA leadership as part engagements with faith based organizations, civil society groups and professional bodies. The party is meeting these groups to understand their needs and factor same into the party’s 2020 manifesto being drafted. Former president Mahama expressed worry about access to justice in the country, saying they should be made available to every citizen. He observed that in most districts, there are “no courts and people have to travel long distances” to access justice. According to Mr Mahama, there is “demand for legal representation at the district level” necessitating the need to expand the legal education. He also asked the Bar to take keen interest in the 1992 constitution and seek a review of certain portions to make it reflect the current social economic state, noting “It currently looks stuck”. Also, Mr Mahama asked the Bar to look at the justice dispensation as there are too many delays in cases. President of the Ghana Bar Association, Anthony Forson, assured the NDC of their cooperation. On the mass failure of students, he said it was not deliberate and not the “fault of the General Legal Council”. He said admissions are based on performance and nothing like protocol. “There is no agenda, we will not shoot ourselves in the foot,” he added General Secretary of NDC, Johnson Asiedu Nketia indicated the Bar was vociferous in the past but is now silent. Responding, Forson insisted they were not political, though they have members belonging to different political parties. By Evelyn Tengmaa|3news.com|Ghana]]>

Hold a national dialogue on economy, bring some of the best brains together – Mahama tells govt

Unpopular opinion: Reasoning with the GLC on non-disclosure of pass mark in 2022 Makola Entrance Exam

Report: Mahama is leading in Ablekuma West; Ursula expected to lose her seat in 2024