Kofi Annan[/caption] The return of the former Secretary-General of the United Nations (UN), Busumuru Kofi Annan, to his ancestral home begins with the arrival of his body in Accra. The body of the global icon will be accompanied by his wife, children and some UN officials, who will be received at a brief ceremony to be led by President Nana Addo Dankwa Akufo-Addo. The Nobel Laureate died at age 80 in Bern, Switzerland, on Saturday, August 18, surrounded by his wife, Nane Maria, and their children Ama, Kojo and Nina. He was reported to have fallen ill on his return trip from South Africa after he had attended the centenary celebration of the birth of a former South African President, Nelson Mandela. He was hospitalised in Geneva and later airlifted to the Swiss capital, Bern, where he died peacefully. State Burial Annan will be accorded a state burial and his body interred at the new Military Cemetery in Accra on September 13, 2018 after burial service at the Accra International Conference Centre (AICC) on Wednesday, September 12. An outline of the programme issued by a member of the Kofi Annan Funeral Planning Committee, Mr Kojo Oppong Nkrumah, who is also the Minister of Information designate, said the general public would be given the opportunity to file past the remains on Tuesday, September 11, 2018. It said dignitaries, including chiefs, Members of Parliament (MPs), ministers of state, and members of the diplomatic corps would file past the body on Wednesday, September 12, 2018. Tributes Born in Kumasi on April 8, 1938, the Ghanaian diplomatic icon served as the 7th Secretary-General of the UN from January 1997 to December 2006. He was the co-recipient of the 2001 Nobel Peace Prize with the UN. After his death, following a short illness, world leaders continue to celebrate Kofi Annan’s contribution to humanity. All the comments had something to say about the contribution of the former UN Secretary General to global peace and human development.

READ ALSO:  Do aphrodisiacs really work?
President Nana Addo Dankwa Akufo-Addo, former Presidents John Dramani Mahama and Jerry John Rawlings, the UN Secretary General, Antonio Guterres; the British Prime Minister, Theresa May; the Russian President, Vladimir Putin; the French President, Emmanuel Macron, and the Indian Prime Minister, Narendra Modi, have all paid glowing tributes to Kofi Annan’s memory. Other leaders who have expressed their condolences are the Prime Minister of Israel, Benjamin Netanyahu; the South African President, Cyril Ramaphosa; the Nigerian President, Muhammadu Buhari; the German Chancellor, Angela Merkel, and former US Presidents Barrack Obama and Bill Clinton. In recognition of Annan’s stature and to mourn him, President Akufo-Addo directed that Ghana’s National Flag should fly at half mast across the country and in all the country’s diplomatic missions across the world for one week in honour of the celebrated statesman. 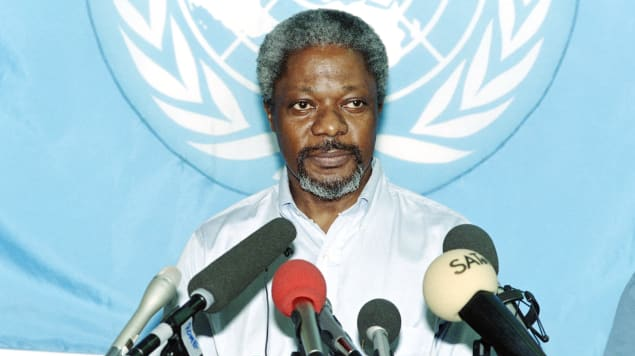 Biography Kofi Annan joined the UN system in 1962 as an administrative and budget officer with the World Health Organisation (WHO) in Geneva. He later served with the Economic Commission for Africa (ECA) in Addis Ababa, the UN Emergency Force (UNEF II) in Ismailia, the United Nations High Commission for Refugees (UNHCR) in Geneva and in various senior posts in New York, dealing with human resource, budget, finance and staff security.  Before becoming UN Secretary-General, he was Under-Secretary-General for Peacekeeping and facilitated the repatriation from Iraq of more than 900 international staff and other non-Iraqi nationals and also served as Special Representative of the Secretary-General to the former Yugoslavia and Special Envoy to NATO. One of his main priorities during the period was a comprehensive programme of reforms that sought to revitalise the UN and make the international system more effective. He was a constant advocate for human rights, the rule of law, the Millennium Development Goals and Africa, and sought to bring the organisation closer to the global public by forging ties with civil society, the private sector and other partners. On his initiative, UN peacekeeping was strengthened in ways that enabled the UN to cope with a rapid rise in the number of operations and personnel. It was also at his urging that in 2005, member states established two new inter-governmental bodies: the Peacebuilding Commission and the Human Rights Council. Mr Annan also played a central role in the creation of the Global Fund to fight AIDS, tuberculosis and malaria; the adoption of the UN’s first-ever counter-terrorism strategy and the acceptance by member states of the “responsibility to protect” people from genocide, war crimes, ethnic cleansing and crimes against humanity. His “Global Compact” initiative, launched in 1999, has become the world’s largest effort to promote corporate social responsibility. Annan believed that the expertise and evidence needed to solve pressing problems such as poverty, violent conflict and poor governance in most cases already existed, saying that progress was held back too often due to the lack of leadership and political will to use them to identify and deliver solutions. He set up the Kofi Annan Foundation in 2007 to mobilise leaders of all sectors to provide leadership where it was needed. With the foundation, he mobilised political will to overcome threats to peace, development and human rights. It works on the premise that there can be no long-term peace without development and no sustainable development without peace and that no society can long remain prosperous without the rule of law and respect for human rights. The foundation works to identify new threats to peace and security and supports Annan’s preventive diplomacy and mediation activities. It also works with selected partner organisations to amplify Annan’s voice and catalyse effective action on the promotion of food and nutrition security, sustainable development and support for good governance, the rule of law and respect for human rights. Today, the foundation devotes considerable time to support democracy and elections with integrity. Kofi Annan chaired the Global Commission on Elections, Democracy and Security (March 2011 to September 2012) and in January 2013, launched the West Africa Commission on Drugs as a response to the surge in drug trafficking and consumption in West Africa and their impact on security, governance and public health. In early 2008, he led the African Union’s Panel of Eminent African Personalities which mediated a peaceful resolution to post-election violence in Kenya. From February to August 2012, he was the UN-Arab League Joint Special Envoy for Syria mandated to seek a resolution to the conflict there. Mr Annan was the Founding Chairman of the Alliance for a Green Revolution in Africa (AGRA), which works for a food secure and prosperous Africa by promoting rapid, sustainable agricultural growth based on smallholder farmers. He chaired the African Progress Panel, which advocates at the highest level equitable and sustainable development in Africa. The panel includes distinguished individuals from the public and the private sectors and publishes an annual Africa progress report. He was an active member of The Elders, an independent group of global leaders which works together for peace and human rights, and in 2013 was appointed its chairperson. Mr Annan was the Chancellor of the University of Ghana and held a number of positions at universities around the world. He was a board member, patron or honorary member of a number of organisations, including the United Nations Foundation. He was married to Nane and they have three children. His widely acclaimed memoir: Interventions: A Life in War and Peace, was published in 2012.
READ ALSO:  Europe and India join Boeing aircraft ban after crash
Source: Daily Graphic | Ghana]]>