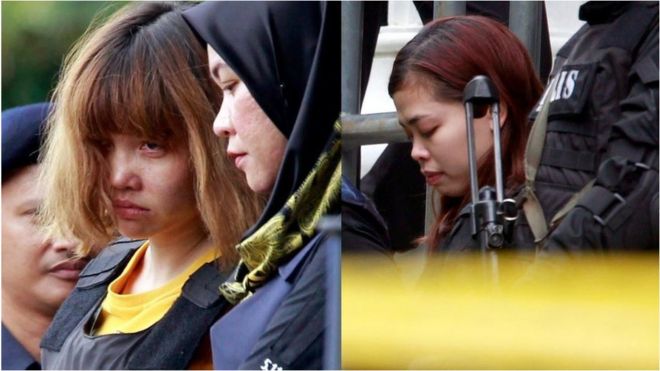 Two women accused of killing Kim Jong-nam, the estranged half-brother of North Korea’s leader, have been charged with his murder.

The women, Doan Thi Huong from Vietnam and Siti Aisyah from Indonesia, allegedly smeared deadly VX nerve agent on Mr Kim’s face in Kuala Lumpur airport on 13 February. They appeared in court near Malaysia’s capital, protected by special forces. They could face the death penalty if convicted of murder. No plea was recorded in the magistrates’ court as only higher courts have jurisdiction over murder cases. But after the charge was read out, Doan Thi Huong said “I understand but I am not guilty,” in English. It is widely believed that North Korea was responsible for the attack, which it fiercely denies. Kim Jong-nam, was openly critical of the North Korean regime. They will appear again on 13 April, when prosecutors will apply for them to be tried jointly in a higher court. The charges were read first against Ms Aisyah, then against Ms Huong, both of whom were in handcuffs. Siti Aisyah’s lawyer Gooi Soon Seng asked the court to issue an order banning the police and potential witnesses from making statements that might endanger his client’s right to a fair trial. Both women have previously said they were paid to take part in what they thought was a TV prank. Malaysia’s chief prosecutor earlier said no decision had yet been taken on whether to charge a North Korean man, Ri Jong Chol, who is also being held over the killing. That “depends on the outcome of the police investigation, which is still ongoing”, Mohamed Apandi Ali was quoted as saying by AFP news agency. Other suspects in the killing include a senior official at the North Korean embassy in Kuala Lumpur and a staff member of the state airline. South Korea believes at least four suspects are North Korean spies. Kim Jong-nam, 42, was at a check-in desk for a flight to Macau, where he lives, when he was accosted. His face was smeared with the toxic nerve agent VX – an internationally banned chemical weapon – and he died within 15-20 minutes, Malaysia’s health minister said on Sunday. North Korea has not confirmed that the person killed was Kim Jong-nam, as he was travelling under a different name. Pyongyang has only said that he was a North Korean travelling on a diplomatic passport. The country also opposed Malaysia conducting an autopsy.
READ ALSO:  NDC flagbearer aspirant withdraws to support Mahama
A high-level delegation from North Korea, including the country’s former deputy ambassador to the UN, Ri Tong-il, arrived in the Malaysian capital on Tuesday. They said they wanted to claim the body and were seeking the release of North Korean suspect Ri Jong Chol.

Who are Doan Thi Huong and Siti Aisyah?

Little is known for definite about Doan Thi Huong and Siti Aisyah except that they had left their homes in different parts of Asia and were trying to make a living in Malaysia. Malaysian police officials described Ms Huong, a 28-year-old from Vietnam, as an “entertainment outlet employee” while Ms Siti, 25 from Indonesia, was working in a hotel massage parlour. Ms Huong’s Facebook page, in which she posted under the name Ruby Ruby, showed her posing in a number of selfies and glamour shots. There are rumours she once auditioned for Vietnam’s version of Pop Idol. Her family said she left her home village in north Vietnam at 17 to study in the capital Hanoi, and had rarely returned home since. They said they were surprised to learn she was in Malaysia. Her stepmother told BBC Vietnamese that the family were fed up with all the attention they had received but were grateful for the support of their neighbours. “They are sympathetic because they don’t understand how a daughter of a family with high moral values like us could become like that,” Nguyen Thi Vy, 54, said. Siti Aisyah was arrested for the killing along with her 26-year-old Malaysian boyfriend, who was later released on bail. She told the Indonesian embassy officials that she thought she was taking part in a reality TV show, and had been paid 400 Malaysian ringgit ($90; £72) to smear what she thought was baby oil on to Mr Kim’s face. Ms Siti was out partying with her friends the night before the killing. A friend, who spoke anonymously, said they had been celebrating her birthday, which had been the day before. Film footage purportedly from the evening shows her talking with friends about becoming an internet star.
READ ALSO:  Gov’t to cut jobs in 2017 as part of IMF conditionalities – Bawumia

Who are the other suspects?

Increasing cocoa price by 21% is an insult – COCOBOD told