This is the first time Saudi Arabia has admitted the death of Jamal Khashoggi photo: AFP/GETTY[/caption]

Journalist Jamal Khashoggi was killed in a fight in the Saudi consulate in Istanbul, the country’s state TV reported quoting an initial probe.

It said deputy intelligence chief Ahmad al-Assiri and Saud al-Qahtani, senior aide to Crown Prince Mohammed Bin Salman, were dismissed over the affair. US President Donald Trump said what had happened was “unacceptable” but that Saudi Arabia was a “great ally”. This is the first time the kingdom has admitted Mr Khashoggi has died. The acknowledgement follows two weeks of denials that Saudi Arabia had any involvement in the disappearance of the prominent Saudi critic when he entered the consulate in Istanbul on 2 October to seek paperwork for his upcoming marriage. The Saudi kingdom had come under increased pressure to explain Mr Khashoggi’s disappearance after Turkish officials said he was deliberately killed inside the consulate, and his body dismembered. On Friday, Turkish police widened their search from the consulate grounds to a nearby forest where unnamed officials believe his body may have been disposed of. Observers are questioning whether Riyadh’s Western allies will find the Saudis’ account of a “botched rendition” convincing – and whether it will persuade them not to take punitive action against Saudi Arabia.

‘This is only a first step to the truth’

Analysis by BBC Security Correspondent Frank Gardner The Saudi leadership will now be hoping that its belated admission that Khashoggi did die after all inside its consulate – coupled with a handful of sackings and arrests – will be enough to draw a line under this affair. It won’t. This is only a first step towards publicising the truth of what really happened. Given the days of indignant denials by the Saudi leadership it’s doubtful we would have even got this far without sustained international pressure. There can only be one of two possible alternatives here. Either – as many suspect – the powerful Crown Prince Mohammed Bin Salman was to blame, or he had lost control of his inner circle, something most observers find hard to believe. MBS, as he’s known, has a huge following amongst young patriotic Saudis who see him as a visionary reformer. If that support were now to ebb away then the crown prince could find himself dangerously isolated at court.
READ ALSO:  Khashoggi murder trial resumes in Turkey

What is Saudi Arabia’s version of events?

A statement from Saudi Arabia’s public prosecutor said a fight broke out between Mr Khashoggi, who had fallen out of favour with the Saudi government, and people who met him in the consulate – ending with his death. The investigations are still under way, it said, and 18 Saudi nationals have been arrested. The Saudi authorities have yet to give evidence to support this version of events. State media said Saudi King Salman had ordered the sacking of two senior officials. Saud al-Qahtani is a prominent member of the Saudi Royal Court and adviser to Prince Mohammed bin Salman. Major-General Ahmed al-Assiri has acted as the top spokesman for the kingdom about the war in Yemen. Gen Assiri spoke to the BBC in 2017 about the conflict, defending Saudi Arabia’s actions. King Salman has also reportedly ordered the formation of a ministerial committee, headed by Crown Prince Mohammed, to restructure the intelligence services. Saudi Arabia said it had acted on information provided by Turkish authorities as part of its inquiry, investigating a number of suspects.

How did Trump react?

President Trump said the arrests were an important “first step”. He praised the kingdom for acting quickly, and while he said sanctions were an option against the country, he spoke of the possible effect such moves would have on the US economy. Asked if he found Saudi Arabia’s version of events credible, he replied, “I do.” He stressed the importance of Saudi Arabia as a counterbalance to Iran in the Middle East, and pushed back against the need for sanctions against the country in light of the new information, talking about the effect of such a move on the US economy. He spoke of his visit to Saudi Arabia – his first trip abroad as president – and the $110bn (£84bn) arms deal he signed with the kingdom. “I’d rather keep the million jobs [in the US] and find another solution,” he said. Earlier this week Mr Trump said there would be “very severe” consequences if Saudi Arabia was proved to have killed the journalist. The White House said in a separate statement the US was “deeply saddened” to hear confirmation of Mr Khashoggi’s death.
READ ALSO:  Saudi prince to donate $32bn fortune to charity 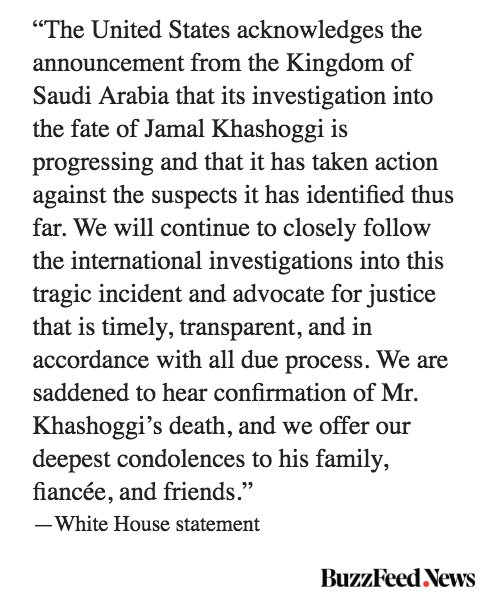 US Senator Lindsey Graham, a Republican highly critical of the Saudis, said he was “sceptical” of the report on the journalist’s death.

Why does Turkey say he was murdered?

Turkish officials believe Mr Khashoggi was killed by a team of Saudi agents inside the consulate, and his body then removed – and they say they have video and audio evidence to back this up. Saudi Arabia has denied this, and initially insisted Mr Khashoggi had freely left the embassy. Turkish newspapers with close links to the government have published gruesome details of the alleged audio, including what they describe as the sounds of screams and Mr Khashoggi being interrogated and tortured. Meanwhile, Turkish media say they have identified a 15-member team of suspected Saudi agents who flew into and out of Istanbul on the day of the disappearance.

Ghana should be boasting of 1,500 factories if past leaders had...