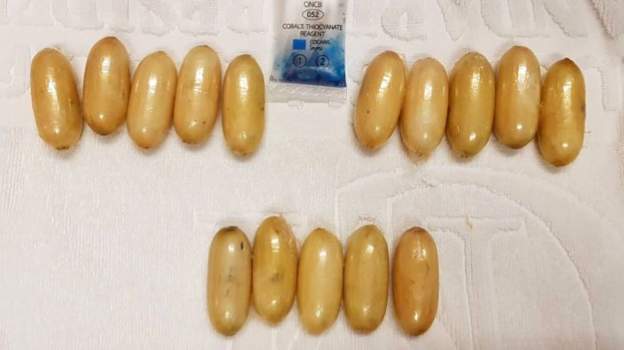 A Kenyan man has been arrested at the international airport in Thailand’s capital, Bangkok, trying to smuggle into the country 68 capsules of cocaine.

Glenn Chibasellow Ookow had swallowed the capsules that were later found to contain a total of 1.2kg (2.6lb) of cocaine, the Thai drug authorities said.

It as an X-ray showing the objects in the man’s stomach that alerted Thailand’s Office of the Narcotics Control Board (ONCB).

According to the Thailand’s Nation paper, a Nigerian man, who was also arrested, had allegedly hired the Kenyan to bring in drugs to Thailand and other countries in the region.

“This is part of a drug network in Thailand,” the AFP quotes an ONCB statement as saying.

Mr Ookow, 43, had flown into Bangkok on Monday from Ethiopia, AFP reports.

Niyom Termsrisuk of the ONCB said, the arrests were part of a crackdown on drug trafficking and the authorities had arrested 43 suspects since last October.